Students in Jill Ogline Titus’s Fall 2018 Introduction to Public History (HIST 301) class spent the semester digitally interpreting the massive Gettysburg Cyclorama painting, creating an interactive timeline of the painting’s history and visually mapping the many stories embedded in the canvas. Students used Timeline JS, an open-source tool that allows users to build visually rich, interactive timelines, to explore the convoluted history of the painting, tracing it from its initial years of sold-out crowds to neglect on a backlot to its current position as the centerpiece of the exhibit at the Gettysburg National Military Park Museum and Visitor Center. In the second phase of the project, drawing on course readings and discussions about interpreting material culture, students used StoryMap JS, an open-source mapping tool, to construct visual stories that annotate and enliven each segment of the painting. The students’ StoryMaps effectively reveal the multiple layers of narratives embedded in the Cyclorama, including civilian experiences during the battle, medical practices during the war, tactical strategies used by the armies at Gettysburg, the crafting of historical memory, the artistic techniques undergirding painting in the round, and the challenges of preserving this massive piece of art. The students’ work is accessible in a public-facing Scalar site that invites viewers and visitors to interact with a wide range of stories undergirding the painting.

Launched in the Spring of 2017, the Killed at Gettysburg project spotlights a cross-sections of the more than 7,000 Union and Confederate soldiers who died at, or shortly after, the Battle of Gettysburg. Researched and written by students in both the CWI Fellows program, as well as by a small group of first-year student volunteers, these profiles tell the stories of Gettysburg’s fallen soldiers, including their personal backgrounds and motivations for fighting, their war-time experiences, and the wide-ranging impacts of their deaths, both in history and memory. They also trace the soldiers’ final footsteps across the Gettysburg battlefield using digital mapping, student-captured photographs of pertinent landmarks and monuments, and short interpretive captions.

In Fall 2018, CWI Fellows Benjamin Roy ’21, Cameron Sauers ’21, and James Goodman ’20 curated a small exhibit on rare Civil War photography of the Gettysburg battlefield that will debut at the June 2019 CWI conference. Through original research and peer workshopping of their writing, the project team has created an illuminating exhibit that explores 19th-century ideas about death, war, and the cultural impacts of the battle of Gettysburg.

Read their reflections on the challenges of making photographs speak.

From 2016-2018, small groups of CWI Fellows under the direction of CWI faculty partnered with Gettysburg National Military Park to draft text and identify images and primary sources for new interpretive waysides located at various locations throughout the park.Combining field studies, historiographical frameworks, and secondary source readings with research trips to park archives and other repositories, students crafted text, photos, and captions for new waysides to be placed on Little Round Top, Cemetery Hill, and Barlow’s Knoll, as well as near the Virginia Memorial and along West Confederate Avenue. In Spring 2018, the final semester of the project, Abby Cocco ’19 and Zach Wesley ’20 tackled a wayside interpreting General Alfred Iverson’s ill-fated Confederate assaults along Oak Ridge on July 1, 1863, while seniors Jeff Lauck and Dan Wright (pictured here with Gettysburg NMP’s Chief of Interpretation and Gettysburg College ’06 alum, Chris Gwinn) created new wayside for the Abram Brian house, the home of a free African American who lived on Cemetery Ridge during the time of the battle and a heavily-trafficked spot near the the end of the the park's auto tour route.

Over the course of spring semester 2016, students in Jill Ogline Titus’s Introduction to Public History class collaboratively curated a digital exhibit on campus protest in the Vietnam War era. The student curators were charged with the responsibility of developing an exhibit that would provide historical and interpretive context for a collection housed in Gettysburg College’s Musselman Library and support staff’s efforts to share the rich materials located in Special Collections & College Archives with a broader public audience. The exhibit features pamphlets, buttons, newspaper clippings, and other materials from the library’s MS-036 Radical Pamphlets, 1965-1975 collection. Working collaboratively, students developed an interpretive framework for the exhibit, selected materials for inclusion and prepared them for use on the web, wrote the exhibit narrative and captions, created metadata and video to enhance the interpretation, customized the exhibit design, and installed the exhibit. The exhibit was built in WordPress and utilizes Omeka; it represents an ongoing partnership between Musselman Library, the Civil War Institute, and the Gettysburg College Educational Technology Office. Browse the exhibit.

Over the course of the semester, students in Peter Carmichael’s Fall 2011 Introduction to Public History course completed walking tour podcasts. The goal of each group was to explore how different people can attach radically different meanings to the same historical place.

“The 1913 Gettysburg Reunion tries to explore how the battlefield was not only the sight of fighting but of a reunion of combatants, most of whom had radically different versions of the Civil War, and of unrealized African American social and political advancement in the war’s aftermath. One of the greatest challenges for our group was simply trying to create a visual image of what was happening in Gettysburg in 1913. Although most of the reunion’s activities took place on the battlefield and thus on ground that was sure to be preserved, no physical evidence of the massive reunion remains.” (Brian Johnson, ’14)

Creating these podcasts gave the students a taste of the truly collaborative nature of public history projects. “The podcast project was a true example of learning the practice of public history from the inside-out. We were, by intention and design, faced with a great challenge, especially at the undergraduate level. In addition to mastering material and information for the podcast content, we had to juggle the schedules and personalities of our group members, knowing that individual efforts would reflect on the entire group.” (Mary Roll ’12)

Check out links to the podcasts below! 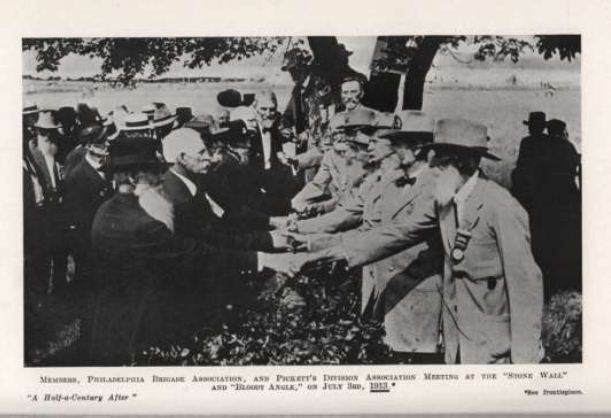 From Behind the Lines of Retreat: Pennsylvania College During the Battle of Gettysburg

From Guns to Ginsburg: Gettysburg College in the 1960s

Begun in 2020, in partnership with Musselman Library’s Digital Scholarship Committee, this project maps Confederate monuments erected in each state, with special attention to the historical context of when, where, and by whom these monuments were erected, as well as the some of the iconography and inscriptions on those monuments. The project seeks to shed light on key trends in monumentation both within and across state lines, as well as highlight some of the nuances and unique facets of Confederate monumentation in particular locations and during specific eras.

These 10-15 minute, student-produced videos by CWI Fellows use site-specific interpretations of individual portions of the battlefield, monuments, historic structures, and vignettes about particular soldiers and civilians to reveal broader themes about the Civil War and Reconstruction, 19th-century history, and historical memory as a whole. Although most of these videos were filmed in and around Gettysburg, several take audiences to other sites in Pennsylvania associated with the Gettysburg Campaign and even into other states, such as Missouri, to interpret the war’s wide-ranging impacts on communities across the country. These videos are housed on CWI’s Facebook page.

The Compiler is CWI’s student blog, featuring a wide variety of originally researched student pieces about the material culture of the Civil War, mini “Killed at Gettysburg” profiles about Gettysburg’s fallen, interpretive reflections on transcriptions of soldiers’ letters and other primary sources, and more. The newest addition to the Compiler is the “War on the Doorstep” series, which interprets the diverse experiences of Gettysburg’s civilians—white and African American, men and women, young and old, immigrants and native Gettysburgians—before, during, and after the battle, with additional emphasis on the tenuous nature of life along the Mason-Dixon line during the Civil War as a whole.