Internship at a U.S. Embassy? It's classified.

Studying abroad was more than an opportunity to fulfill a major requirement or even broaden horizons for Amanda Krehbiel ’17.

“My time in Argentina showed me how much I enjoyed studying the language, the culture, and the history,” said the Latin American, Caribbean, and Latino Studies (LACLS) and Spanish combined major and physics minor. “It also helped me realize what I did and did not want to do. It let me let go of the things I thought I needed to do but may not have wanted.”

Among the things she wanted?

Dedicating her studies to LACLS, and finding a summer internship that enabled her to return to Latin America—this time, as an intern with the U.S. embassy in Panama working on classified projects.

“It’s definitely fun to see the reactions I get when people ask me what I did this summer, and I tell them I worked at an embassy, but it’s classified,” Krehbiel said. “It also made me realize just how many people do this as a career. They can’t tell people what they do all the time. In some ways it’s very empowering, but also humbling because there are people who do this every day.”

While her love of Spanish language and Latin American culture is what encouraged her to apply for an internship with the U.S. embassy, she didn’t know it was what she wanted to major in when she first came to Gettysburg College. Studying Spanish was one of the conditions of the Huge W. Cardenas Spanish Scholarship she received from her high school, though, so she declared a minor in the subject early on.

It didn’t take long for her professors to encourage Krehbiel to consider declaring it as a major.

“It wasn’t hard to talk me into,” Krehbiel recalled. “I’ve always loved the language, and I really enjoyed the classes I was taking.”

Above all, she was interested in the opportunity to dive more deeply into related subjects that she didn’t have access to in high school. When her Spanish prof. Alicia Rolon also suggested studying abroad during her sophomore year in order to improve her fluency earlier in her collegiate career, Krehbiel didn’t hesitate.

She scheduled a meeting with the Center for Global Education, and after a conversation about her interests and a few study abroad programs in Latin America, decided on a program in Mendoza, Argentina.

“I loved my time in Argentina,” Krehbiel said. “I stayed with a host family—a single-mother and her 8-year-old son—and was able to visit so many places. Everything is so relaxed there. The people there work to live, not live to work. It helped me to appreciate a different lifestyle.”

Shortly after coming back home, the Admissions tour guide, Alpha Delta Pi sister, Spanish Peer Learning Associate (PLA) and physics lab assistant knew she wanted to continue her travels in Latin America—but didn’t want to forfeit another semester at the College to do so.

As she looked at her options and talked with her professors, it became more and more clear that a summer internship would her best chance to gain the experience she wanted. Specifically, it was LACLS and Spanish Prof. Alvaro Kaempfer who suggested looking into embassies—whether those of Latin American countries in Washington, D.C., or American embassies around the world.

Krehbiel applied through the federal government job website and listed her top two preferences for placement—Panama and Peru—last October. A month later, she received a phone call from a man working in the embassy in Panama.

“He was very impressed that I was so up-to-date with Latin American politics,” she explained. “This was partly because I had just returned from studying abroad, and partly because of the courses I was taking in my LACLS major. I also remember that he was distinctly impressed that I was a physics minor, too. I think both of those facts played a big role in why I was offered the internship.”

Embassies have five sections—political, economic, management, public affairs, and consular. Krehbiel worked in the political section, and stayed with an American woman working in the consular section. She was able to learn about how foreign service officers live and work, all the while conducting an independent research project concerning a pressing and time-sensitive current issue facing U.S. and Panamanian relations.

Of course, the topic of her project remains classified.

“I knew that I had to get security clearance to even go there because the section that I was working in is a classified section—you can’t enter that section without it,” Krehbiel said. “I figured that I would at least be around that information, but it’s still very weird when you see something that is stamped ‘secret’ for the first time.”

While she is not sure where this experience and her love of Spanish will take her career, she knows that right now, the next step is applying to graduate school.

“It really motivates me when I’m reading or speaking in Spanish and I start to forget that it is a different language,” Krehbiel said. “I just know that I don’t feel ready to stop studying or speaking Spanish. I’m thinking I might get a Ph.D. and become a professor, but we’ll see. It would let me share what I love with other people, and that’s what I really want.” 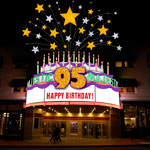