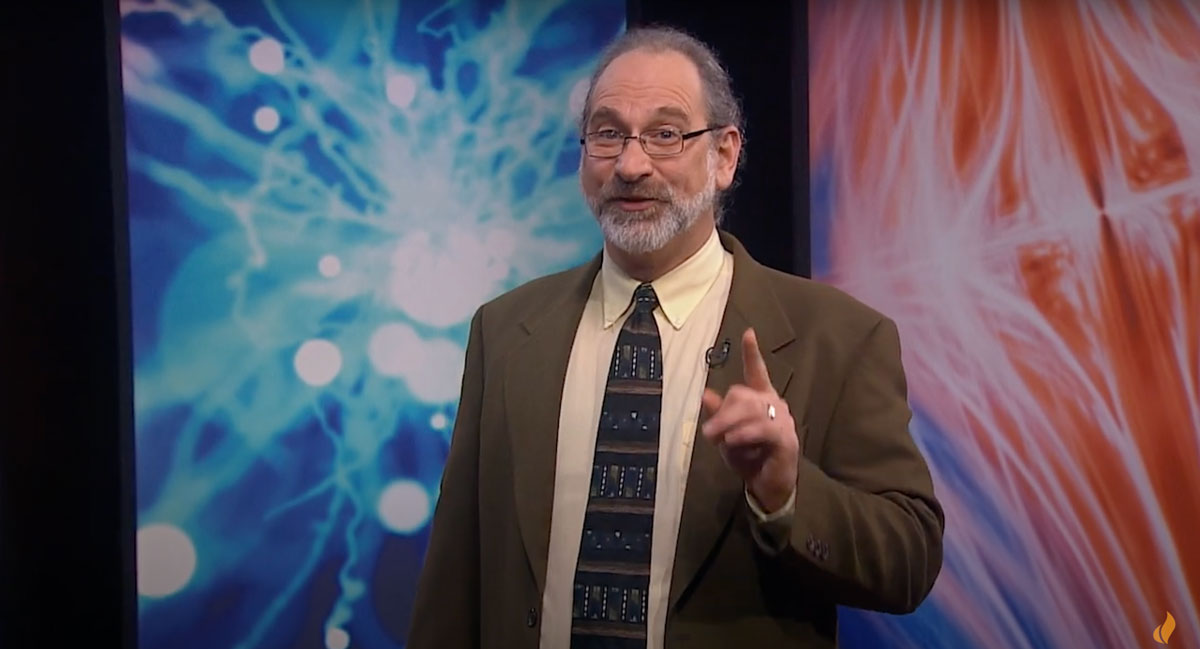 Is time travel possible? How does one explain the Big Bang? Does the multiverse exist? These are the questions Philosophy Prof. Steve Gimbel challenges students to grapple with in his newest online series titled “The Great Questions of Philosophy and Physics,” featured on The Great Courses.

The Great Courses lecture series, produced by The Teaching Company, feature hundreds of college-level audio and video courses taught by elite professors across the nation. Gimbel has been featured in three additional series, including, “Take My Course, Please! The Philosophy of Humor,” “An Introduction to Formal Logic,” and “Redefining Reality: The Intellectual Implications of Modern Science.”

“This series is quite different from what I do in the classrooms here at Gettysburg,” Gimbel said. “The Great Courses series are what we call ‘edutainment.’ I have 30 minutes to introduce a topic, explain the views, and make people go, ‘Woah, that’s cool.’”

Gimbel’s latest release, “The Great Questions of Philosophy and Physics,” aired in April and includes 12 lectures about 30 minutes each. In the course, Gimbel touches upon topics in philosophy and physics that require no preexisting knowledge to understand, bringing together both fields to seek answers. He speaks to questions about methodology, the physical theory as it relates to other beliefs, and the interpretation of mathematical formalism, which is also known as a philosophical approach to mathematics.

“My job as a teacher is to explain three things—explain the physics clearly so everyone gets it, show how the philosophical questions arise from these theories, and explain why really smart people put forward very different views trying to answer these questions,” he said.

Gimbel, in fact, felt drawn to the convergence of the fields of philosophy and physics during his own time at college. He majored in physics as an undergraduate at the University of Maryland, Baltimore County, while taking philosophy classes he deemed fun and interesting. Now, he combines the two in his career in an ever-evolving study of questions of the universe.

“Physics creates philosophy to be done,” said Gimbel. “The physicist does not need to worry about these questions as they work, but once their work is done, there is plenty of grist for the philosopher’s mill.”

An energetic teacher known for jumping on tables and moving excitedly throughout the classroom, Gimbel had to scale back his normal teaching mechanisms while recording the series for The Great Courses.

“In the classroom, the key is to be big. You want to project your voice and make things exciting by bringing a passionate energy,” he said. “But in the studio, it is just you, three cameras, and one camera person on the camera that does close-up shots. … So, it is a completely different toolkit.”

While Gimbel has enjoyed exploring the questions of philosophy and physics for a large platform in the online series, he champions the in-classroom experience at Gettysburg’s residential campus.

“At Gettysburg … we can do the readings, we can really explore the depth of the issue, [and] we can critically evaluate the views with passionate conversations,” he said. “At the same time, I do have to admit that I use some of the same jokes both places.”

Aside from studies in the philosophy of physics, Gimbel researches education, the philosophy of language, the history of ideas, and ethics. He wrote two books that have been reviewed by Scientific American, The New York Review of Books, and The New York Times—Einstein’s Jewish Science: Physics at the Intersection of Politics and Religion and Einstein: His Space and Times.

Explore opportunities to study under distinguished faculty at Gettysburg.

By Phoebe Doscher ’22
Video courtesy of The Teaching Company
Posted: 08/24/20