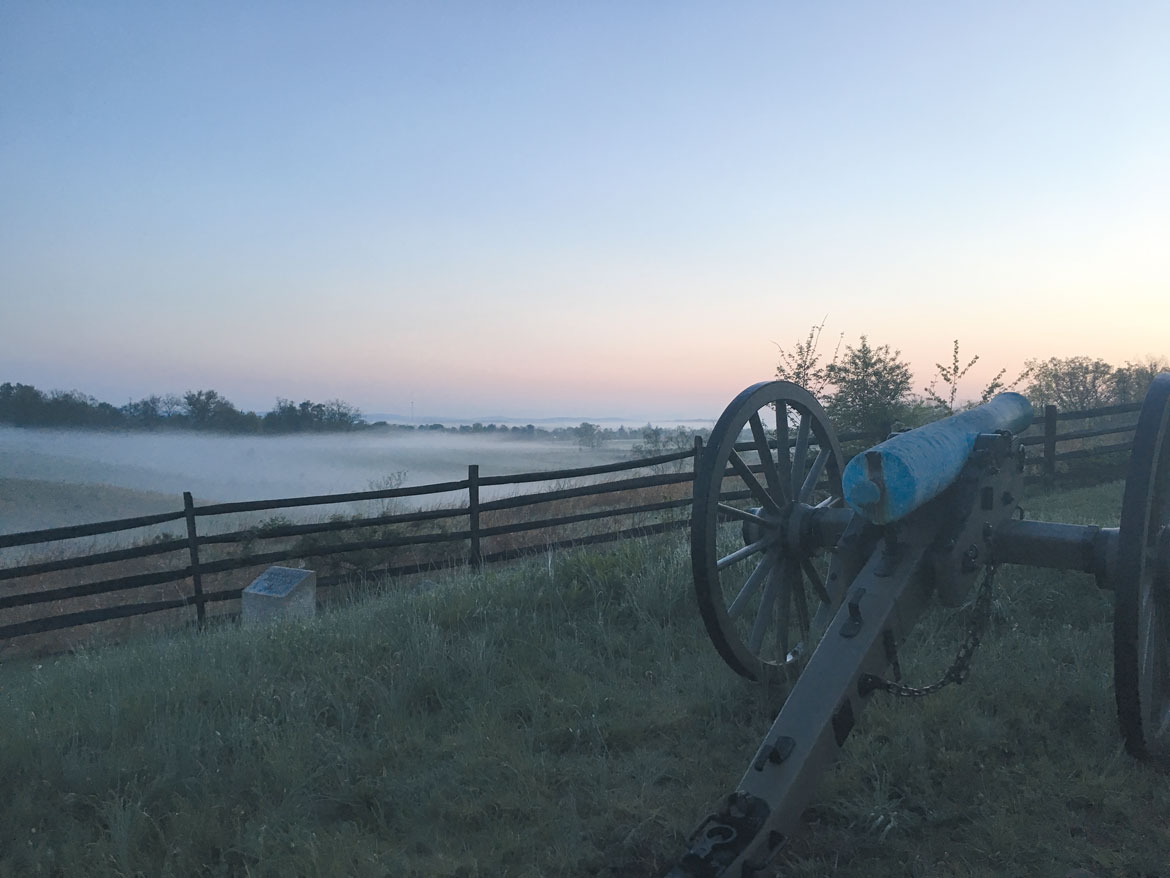 Mere steps from Gettysburg College, the Gettysburg National Military Park (GNMP) is fertile ground for history scholars. But, its role as a living laboratory for disciplines beyond history may be surprising.

Learning through observation and experience is a core tenet of a Gettysburg College liberal arts education. The GNMP provides students and faculty personal, hands-on connections to learning and research in history— as well as science and the arts. 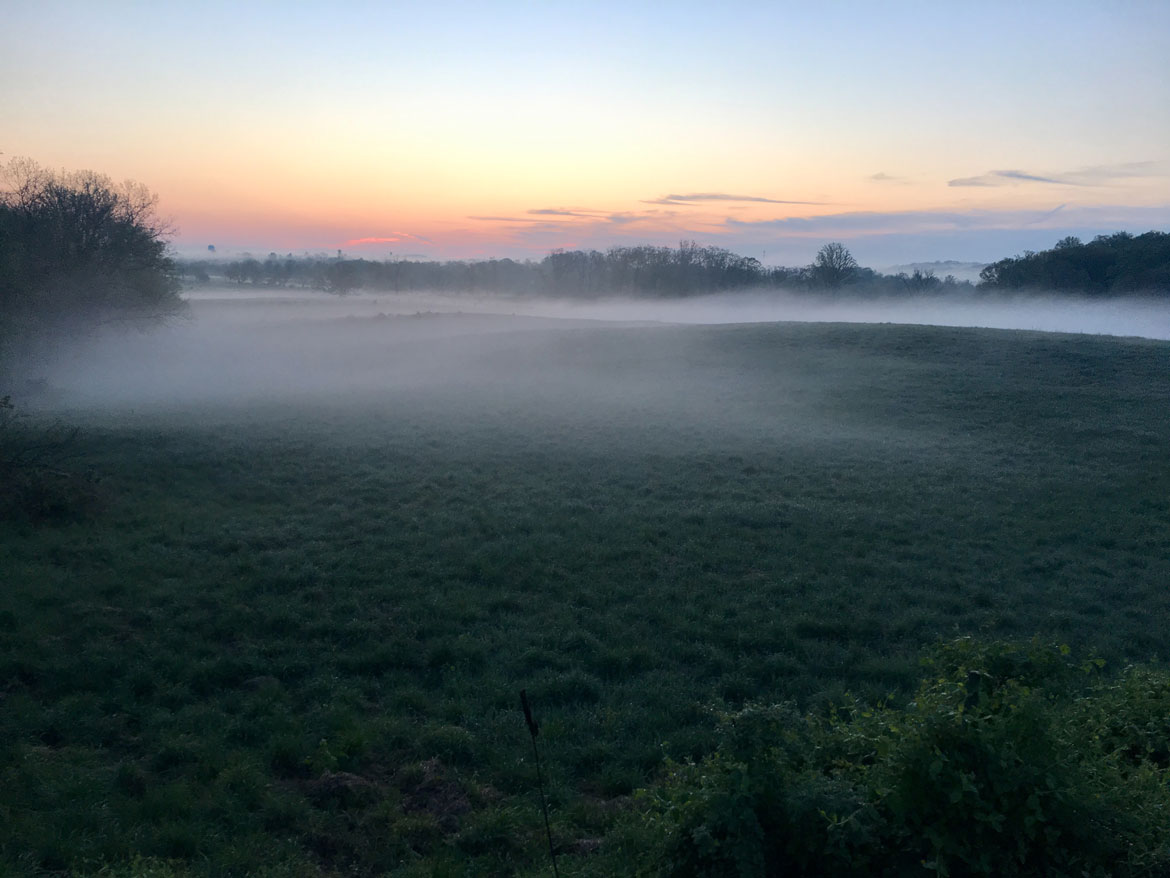 Did you know the battlefield is a prime site for studying geology of the Mesozoic Era? Or that the stones on the bridge near Big Round Top are embedded with dinosaur prints? Many students at Gettysburg College are intimately aware of these facts from their fieldwork in geology, ecology, and environmental sciences.

“Ecology is the study of interactions between species and their environment, but even the most basic concepts can seem rather arcane until students are able to witness them in the field,” said environmental studies Prof. Andrew Wilson, who uses the park in his Principles of Ecology and Environmental Science and Society classes. “Students are generally quite naïve to just how much wildlife there is right on their doorstep.”

The chatter of Wilson’s Principles of Ecology class can be overheard by the students in environmental studies Prof. Sarah M. Principato’s Earth System Science class, as their fieldwork often overlaps.

Principato’s students learn about the geologic history of the area, then study how the different rock types make up the topography of the battlefield and how they influenced the Battle of Gettysburg. From the vantage points of Seminary Ridge, Devil’s Den, and the Overlook Tower, students learn about the geology of the area long before the Civil War: when dinosaurs roamed the earth and when Pangaea began to break apart into the continents.

“My students can see that the layers of rock are mostly at an angle, signaling that there has been tectonic activity. That’s a real ‘aha’ moment for them, like, ‘Oh, wow, the earth was moving!’” 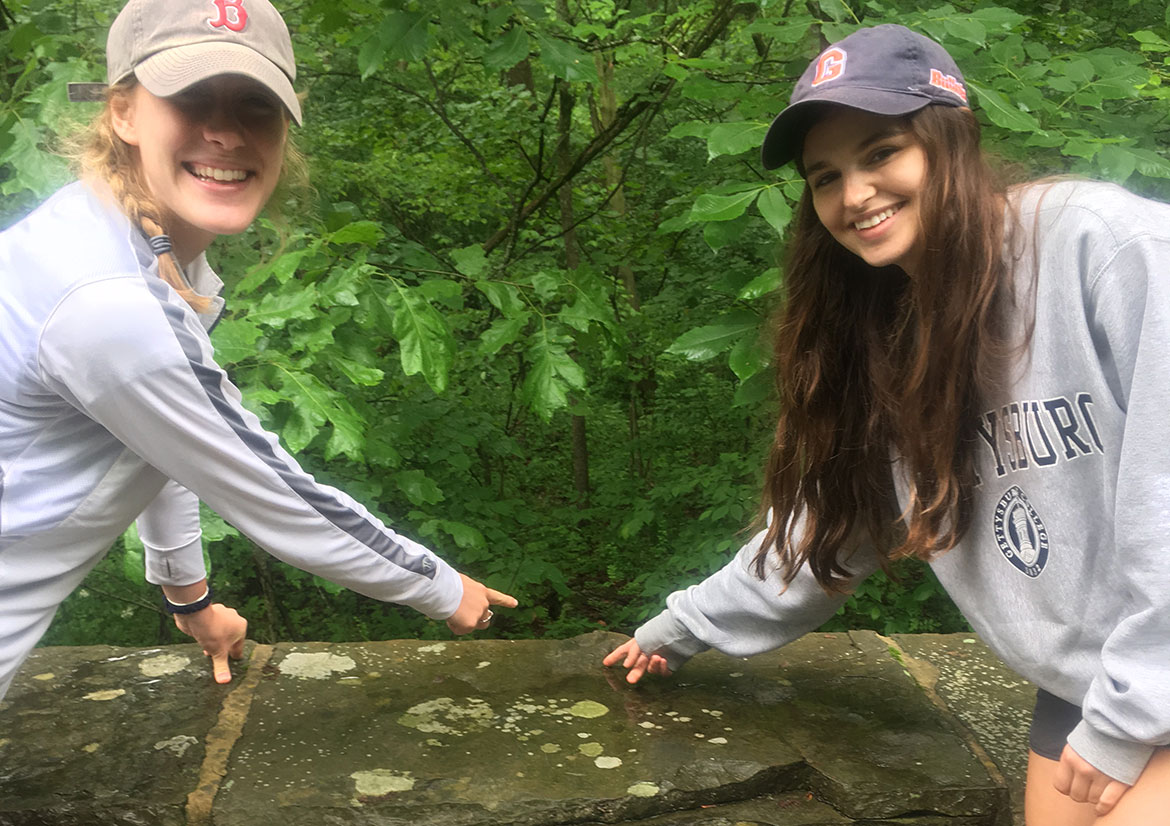 The landscape as teacher

For history and social science scholars, the landscape of the battlefield provides different lessons. Civil War Era Studies Prof. Peter Carmichael, director of the Civil War Institute (CWI), brings his students to the battlefield to read the letters and journals of the soldiers— on the grounds on which they felt, fought, and often perished in 1863. “These moments on the battlefield are powerful for students, who can feel the presence of the past, whether it is at an obscure grave site at Culp’s Hill or at a more popular tourist haunt like Little Round Top,” Carmichael said. “They discover that the words of a single soldier offer a pinhole through which to explore the broader social and political currents of the Civil War. They see that the battlefield is not just a chessboard of tactical moments.”

Experiential learning in the battlefield

History Prof. Ian Isherwood ’00 said a central goal of a liberal arts education is to instill critical thinking skills. “It’s our job as faculty to encourage our students to learn new ways of approaching the past through its tangible symbols in our community,” he said.

As another example demonstrating the instructional value of Gettysburg’s landscape, Isherwood has his students conduct deep readings of Civil War letters while overlooking the fields of Gettysburg. In his First-Year Seminar, students use the letters to reflect on individual trauma, probe the meaning of monuments through the decades, and write reflections on sacrifice while viewing the headstones at the Gettysburg National Cemetery. “When you are between the ages of 18 and 25—prime military service age—the cemetery takes on a particular resonance,” Isherwood said. “Students reflect on their own lives at a leafy liberal arts institution and juxtapose that with the sacrifices that soldiers their age were making in the past. It’s a powerful moment for them.”

Challenging assumptions is integral to a Gettysburg College education. In Prof. Jill Ogline Titus’s class, Rewriting the Past: Historical Fiction and History, she teaches excerpts from The Killer Angels by Michael Shaara, a novel that may be the best-known and most widely read book ever written on the Battle of Gettysburg.

Her class visits Little Round Top after reading the novel to probe how the book has shaped popular understanding of the Battle of Gettysburg and the 20th Maine. “Students, like all people, are sensitive to the power of place, and enjoy the opportunity to make connections between ideas, historical experiences, and landscapes,” explained Ogline Titus.

In art as in other disciplines, rigorous thinking and questioning is required, whether the historical context is examined through a contemporary lens or a historical lens is used to study contemporary events.

“War is a frequent motif for artists and a topic of contemplation for students of art and art history,” explained Prof. Shannon Egan, director of the Schmucker Art Gallery.

The art gallery—small, but mighty—hosts eight to 10 exhibits a year and houses major artistic works depicting the battlefield. Many past exhibits have included interpretations or responses to the Gettysburg Cyclorama depicting Pickett’s Charge.

Through Egan’s History and Theory of Photography class, Erica Schaumberg ’18, an art history major, said she analyzed the works of Civil War photographers such as Alexander Gardner, Timothy H. O’Sullivan, and Mathew Brady.

“Many of the photographs taken after the battle were staged or manipulated to create a more dramatic effect,” Schaumberg said. “They pushed my understanding of how, as Americans, we view the war today and how that perception is intertwined with politics, economics, and a sense of celebrity.”

As dusk descends on the GNMP and the tourists head home, Gettysburg students and faculty continue to muse upon their living laboratory. How did everyday soldiers feel contemplating the same moon back in 1863? Will the camera traps capture the mysterious nocturnal movements of the battlefield wildlife? In what ways will future artists be inspired by the landscapes outside the College’s front door? Every day, the GNMP gives the Gettysburg College community the opportunity to answer these questions and more.