Six years ago, Biology Prof. Véronique Delesalle made a decision to refocus her research, away from studying the ecology and evolution of reproductive strategies in flowering plants. As a result of this transition, she not only engaged more students in her research—she also became a student.

“If you are in a particular field for 25 years, you acquire a fair amount of expertise, but when you shift to studying completely different organisms, you go back into that process as a neophyte,” said Delesalle, “and I think it’s good to remember what it’s like to not be the expert anymore.”

Delesalle’s lab is specifically looking at the interactions that occur between bacterial hosts and their viral pathogens. What factors allow a pathogen to jump from one host to another? What makes a pathogen capable of invading a lot of hosts or just a few hosts?

“These are ecological and evolutionary questions,” said Delesalle, “and my lab is answering [them] using bacteriophage as the model pathogen.” In short, Delesalle is interested in biological evolution, as she was when she worked with plants, but asking a different set of questions, related to the science of infection. What causes the spread of disease? Bacteriophages, Delesalle’s “model pathogens,” are viruses that ‘eat’ bacteria. They infect and replicate within a bacterium, so they can generally be found wherever you find bacteria, such as in soil. Phage therapy is the therapeutic use of bacteriophages to treat pathogenic bacterial infections. Phage therapy has been used before in humans to treat infections that have either not responded, or become resistant, to antibiotics. Just recently, the World Health Organization released a report confirming that there is an alarming lack of new antibiotics in development to fight antimicrobial resistance.

A recent example: This past spring, a man contracted a superbug after visiting the Egyptian pyramids. His infection didn’t respond to antibiotics or other treatment. He ended up in a coma, coming close to death before his wife turned to phage therapy. Using phage therapy, scientists can brew a unique cocktail of phage, individualized to treat a particular infection. Then, the phage adapts to keep fighting it. “Phage can evolve and can deal with resistant bacteria,” said Delesalle, “so that’s how the guy ended up surviving and controlling that infection. Evolution is a beautiful thing, says the evolutionary biologist.”

Delesalle first became interested in bacteriophages when she started teaching a course at Gettysburg about them.

“Seeing the response of our students to that research [was exciting],” Delesalle explained. “And getting them involved in phage research was easier than getting them involved in plant ecology.” There are several reasons for this, Delesalle said, including that phage have more obvious real world applications to medicine and agriculture than perhaps even plants do, at least as a teaching tool.

Another reason why phage is a powerful teaching tool is you can also gather data and observations on a quicker timeline—a plus for college students who want to start a research project as a first-year and walk away with relevant findings before they graduate.

“Because this work is very much accessible to undergraduate students, you end up developing collaborations with them,” Delesalle said. “They become colleagues, so you have very different interactions as a consequence, and that’s a lot of fun. Being able to see students take ownership of a project or contribute to a research lab gives them a sense of empowerment that transforms their undergraduate education.” Madison Strine ’18, who received a prestigious Goldwater Scholarship, began working with Delesalle the summer following her first year at Gettysburg. “Since then, I’ve worked on a variety of projects with her. In my most recent work on Bacillus subtilis extracellular proteases, she has helped me learn to think critically and independently in a scientific context,” said Strine. “She has been an amazing mentor that has prepared me immensely to be a member of the scientific community, and it is thanks to her and the experiences I have had in her lab that I am applying to graduate school for a Ph.D. in the life sciences.”

Delesalle and her students are currently focused on projects that will allow them to understand how phage evolve. As part of a collaborative project with Dr. Greg Krukonis at Angelo State University in Texas, they are working to understand the factors involved in whether or not a phage can eat a narrow diversity or a wide breadth of bacterial strains.

“So, have [the phage] specialized in eating just a few things, or do they eat lots of strains of a particular species or genus of bacteria,” continued Delesalle. “In that vein, we’re also studying what allows a phage to shift their host range to either start eating more things, or start eating different things. Those are both fundamental questions in ecology and evolution, but it’s pretty obvious that those can have practical applications in understanding when a pathogen can shift to a different host, and how disease is spread.”

Read about how another Gettysburg class studies phage to fight fire blight in Adams County orchards. 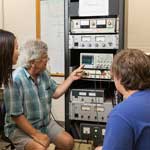 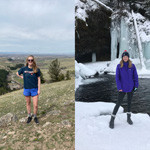