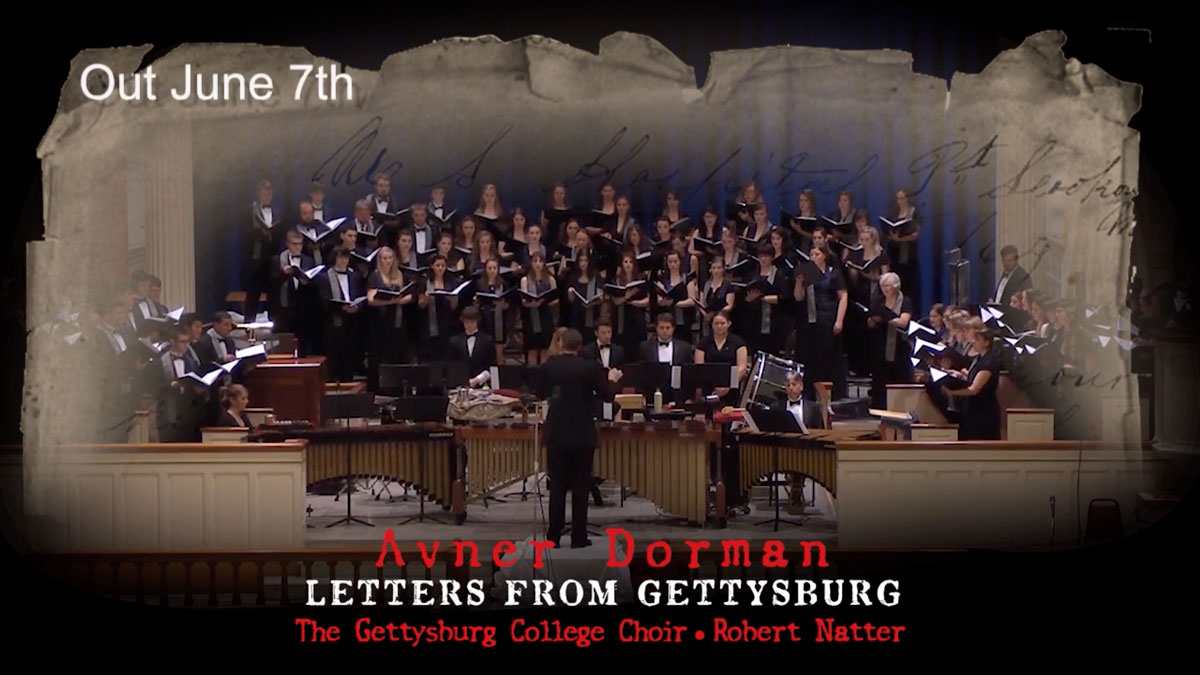 “Consistent hallmarks are the vigor of his writing and the virtuosity it demands of its interpreters,” Allan Kozinn, New York Times

One of the great turning points of American history and its enduring legacy stand at the heart of a new album of works by Avner Dorman. Letters from Gettysburg, set for international release by Canary Classics on June 7, 2019, casts fresh light on one of the bloodiest battles of the American Civil War, as witnessed from the personal perspective of a wounded soldier and his grief-stricken mother. The world premiere recording of the Israeli composer’s haunting work for soprano and baritone soloists, large chorus, and percussion is presented here in company with After Brahms, a trilogy of short pieces for solo piano, and the violin sonata, Nigunim. Their collective power projects the expressive breadth and richness of Dorman’s musical imagination, and his profound feeling for universal human emotions.

“Letters from Gettysburg is very close to my heart, and is the first large-scale choral work that I’ve released commercially,” the composer comments. “The creation of this recording was a true labour of love, and I am very grateful to all my colleagues at Sunderman Conservatory of Music at Gettysburg College who participated in this project. It’s truly special to have an entire release devoted to my music, so I am also very grateful to Gil Shaham and his label, Canary Classics, for making this happen.”

The focal point of Dorman’s album is Letters from Gettysburg, performed by soloists Amanda Heim and Lee Poulis, the Gettysburg College Choir, and Tremolo Percussion Ensemble under the direction of Robert Natter. After Brahms: Three Intermezzos for Piano, was commissioned by Orli Shahamfor her “Brahms Inspired” project; she recorded the work at the end of 2014 as part of a double-disc set for Canary Classics. The program’s final work, Nigunim, Avner Dorman's first composition for Orli and Gil Shaham, was originally released on Canary Classics in July 2013. “Gil Shaham plays both spectacularly and tenderly, and his ... sister, Orli Shaham, matches him closely in lyrical feeling and spontaneous bravura,” noted Gramophone in its review.

Avner Dorman's choral score was commissioned by the Gettysburg College American Civil War Sesquicentennial Planning Committee to mark the 150th anniversary of the Battle of Gettysburg in 2013. Letters from Gettysburg arose from a conversation with Peter Carmichael, director of the Civil War Institute at Gettysburg College, in which he suggested that the composer should consider setting words from the unpublished correspondence of a young soldier. It grew into a five-movement work that raises the experience of one man as a memorial to all victims of war.

Within two days at the beginning of July 1863, around 46,000 men were killed or wounded at the Battle of Gettysburg. The carnage brought both sides, those for and those against the Union, to a state of exhaustion. The men who died in the field were spared the agony of countless others who were badly wounded and rescued, only to die weeks later. Their fate was shared by Lt. Rush Palmer Cady of the 97th New York Volunteer Infantry or “Cronkling Rifles.” Hit by a bullet on the first day of Gettysburg, he died twenty-three days later, on 24 July 1863, at the age of twenty-one. In the weeks before his death, Lt. Cady wrote to his family, expressing his “good courage” against severe pain. The soldier's stoicism contrasts with the raw emotions that flood the letter written by his mother from her son’s deathbed.

Avner Dorman, Associate Professor of Music Theory and Composition at Sunderman Conservatory, structured Letters from Gettysburg around Lt. Cady’s deathbed reflections, and framed them with words of unconditional love penned by his mother. The work confronts eternal questions, those of war and its human cost, of the price of freedom and the constant need to remember its fragility, and the relationship between the particular and the universal. “These questions are an important aspect in my work as a composer,” he observes.

“I think that growing up in a country that is often at conflict and as a descendant of those who escaped persecution, these issues have always dominated my political and societal interests. My earliest significant work for orchestra, Ellef Symphony, for instance, deals with war and death, and the promise of another future; my first opera, Wahnfried, explores the rise of Nazism in the context of German nationalism and the Wagner family circa 1900. And my Prayer for the Innocents commemorates the children massacred in 2004 in the school siege in Beslan, Russia. I’ve always been drawn to texts that present the perspective of the individual within the context of war, which led me to Rush P. Cady’s letters, to his humanity, his heroism, his and his family’s pain inflicted by war.”

Since writing Letters from Gettysburg in 2013, Avner Dorman has become increasingly alarmed at the gulf between the healing language of Abraham Lincoln’s Gettysburg Address and the divisive political rhetoric voiced in today's United States. Contemporary political discourse, he observes, has been infected by sentiments rooted in pre-Civil War times that had remained dormant for many decades.

“For me,” concludes Avner Dorman, “the central lesson that can be learned from Letters from Gettysburg, is that, ultimately, conflict and disagreement hurts people and families. It’s much easier to fight over an ideology when we forget that the people who suffer by it are individuals and families - people we can all identify with. It’s so easy to cast a whole group of people as “the enemy.” But we must remember that every person has thoughts, feelings, and loved ones. If we could only remember that, our political discourse today would become much more compassionate and empathetic. I believe that, regardless of their political affiliations, anyone reading Rush P. Cady’s letters, and his mother’s letter, can identify with their pain, their hopes, and their tragedy.

Avner Dorman writes music of intricate craftsmanship and rigorous technique, expressed with a soulful and singular voice. A native of Israel now living in the United States, Dorman draws on a variety of cultural and historical influences in composing, resulting in music that affects an emotional impact while exploring new territories. His works utilize an exciting and complex rhythmic vocabulary, as well as unique timbres and colors in orchestral, chamber, and solo settings.

Dorman’s music is championed by conductors including Zubin Mehta, Ricardo Chailly, and Andris Nelsons, and by soloists Gil Shaham, Martin Grubinger, and Hilary Hahn. Dorman’s music has garnered numerous awards and prizes, including the 2018 Azrieli Prize for Jewish Music, and his debut opera, Wahnfried, was named a finalist in the category of World Premiere at the International Opera Awards. At the age of twenty-five, Dorman became the youngest composer to win Israel’s prestigious Prime Minister’s Award for his Ellef Symphony.

Dorman is an active conductor, and is the current music director of CityMusic Cleveland Chamber Orchestra. He holds a doctorate in composition from the Juilliard School and serves as Associate Professor of Music Theory and Composition at the Sunderman Conservatory of Music at Gettysburg College.