Following a timeout with 18 seconds left and with her team clinging to a one-goal advantage over The College of New Jersey in the NCAA Division III Championship, Emma Christie ’17 strode confidently to the far side of the field in front of the Gettysburg fans, nodding her head up and down the whole way.

The women’s lacrosse team knew this was their moment of glory. Despite being deep in their own territory, the sure-handed Bullets passed the ball away from the scrambling Lions as the seconds ticked away and the final horn blared across the Roanoke (Virginia) valley.

That confidence and poise in the heat of the moment from Christie and her four teammates helped steer Gettysburg College to its second national title in the sport of women’s lacrosse.

“They’ve been an outstanding group,” said Head Coach Carol Daly Cantele ’83. “I think their greatest quality is they’ve never—ever—made it about themselves.”

The quintet—Christie, Caroline Jaeger ’17, Shannon Keeler ’17, Macauley Mikes ’17, and Katelyn Neillands ’17—had come close to the semifinals three times before. But despite winning Centennial Conference championships and ranking among the nation’s elite, the team didn’t get to the national championship.

That all changed this spring. The seniors built a strong team culture centered around the idea of living in the moment—not worrying about the past or the future, but focusing on the here and now.

When the team fell behind 5–4 with eight minutes left, that season- long mindset dominated. The seniors rallied their teammates with shouts of encouragement and heady play on the field.

“The seniors led in very different ways and different manners,” noted Cantele. “They distributed their leadership equally and no one had any extra burden. I think that made for a unique and special group.”

“It was a hard- fought victory: two exceptional teams giving it their all, battling to the final finish.”
—Carol Daly Cantele’83

After climbing to the top of their sport, the graduates are headed off on very different journeys. Christie went to Boston to join the Beacon Hill Staffing Group as a junior staffing consultant. Jaeger didn’t stray too far from Gettysburg, taking a position as community engagement associate for a local minor league baseball team, the Lancaster Barnstormers. Keeler joined a host of recent Gettysburg grads at AT&T in its Business Sales Leadership Development program. The three of them majored in Organization and Management Studies. The two health sciences majors, Mikes and Neillands, have their sights set on careers in physical therapy and optometry, respectively.

They hoisted the trophy and capped their lacrosse careers on May 28, returning to the greetings of a grateful gang of revelers and the familiar lights of Clark Field. On Monday, they quietly departed campus, leaving behind the trophy, memories of a dream season, and a legacy to be continued. 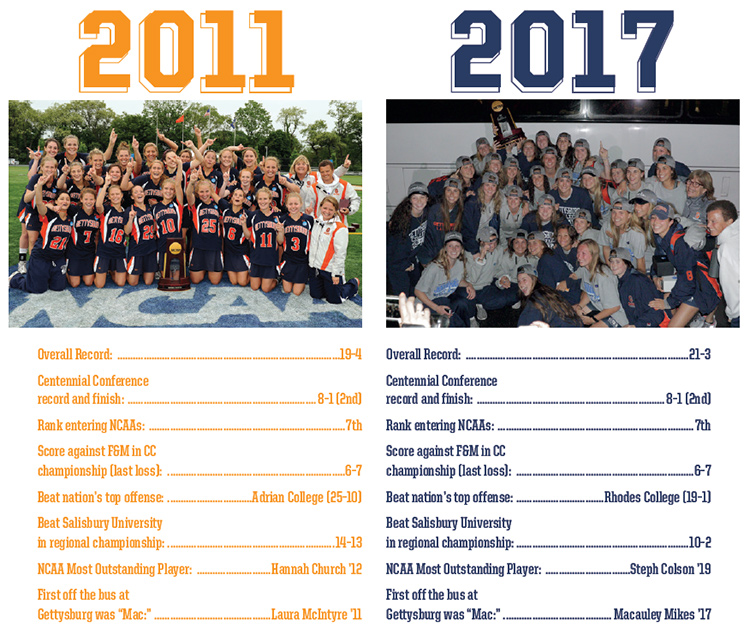