When asked about being named a semifinalist for the Campbell Trophy—one of the most prestigious academic-oriented awards in college football—Cordell Boggs ’17 smiles and modestly deflects. Instead of talking about the award, he tells a story.

“Last year, I was a junior and [my teammate] Pierce was a senior. We were both tackles on offense, and we weren’t having the best first half of the game,” Boggs said.

“At half time, it was just me and him in the locker room, and he said, ‘I’m challenging you to a tackle battle in the second half. You and I are going to compare who did better, and whoever wins gets bragging rights’—you know, that sort of thing.”

Boggs said the friendly competition helped both him and his teammate perform much better in the second half. More importantly, he learned an important lesson in leadership.

“Neither one of us was doing great. [Pierce] held himself accountable while also holding me accountable, and it brought us both up and made us both better,” Boggs said.“That’s the kind of thing I like to try to do—challenge not only other people, but also myself to raise my game and to work a little harder, to be a little smarter. It just breeds competition and makes everything better. 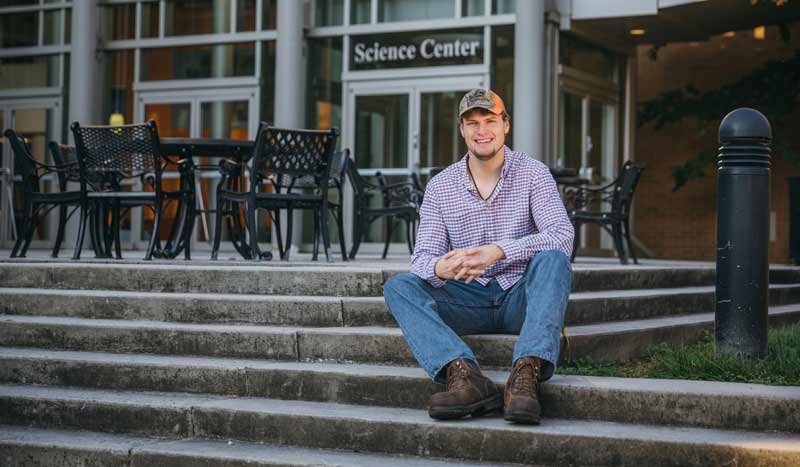 The Campbell Trophy recognizes one player annually for his academic standing, football performance, and community leadership, and it’s not hard to figure out why Boggs was named a semi finalist. He’s humble and self-reflective. As an offensive lineman and the co-captain of the football team, Boggs helped the team lead the Centennial Conference in passing yardage in 2013 and in rushing yardage in 2015. He was a four-year starter on the gridiron, appearing in all but one game and starting each of the last 34.

In addition to being named a semi finalist for the Campbell Trophy, he was also a three-time College Sports Information Directors Association (CoSIDA) Academic All-District First Team selection. Most recently, Boggs was named Academic All-America First Team by CoSIDA, impressively becoming just the fifth football player and first offensive lineman from Gettysburg College to earn this elite status. Off the field, Boggs excels as a Biochemistry and Molecular Biology (BMB) major.

Cordell exemplifies everything we want a student athlete to be. He is an exceptional student and an exceptional football player,” said Coach Kevin Burke, the offensive coordinator for the football team. “More importantly, he is an exceptional person. He is proof that you can excel in many different areas as long as you budget your time well and are committed to the task at hand. And as talented as he is in so many areas, I have never heard him be boastful in anyway—he is universally respected by his peers and the entire campus community.

Teamwork of a different sort

Before Boggs came to Gettysburg, he knew he wanted to play football. He also knew he was interested in the sciences but wasn’t sure what to major in. Boggs only knew he liked that science helped make sense of the world, starting with its smallest pieces. Ultimately, he chose to major in BMB because of its interdisciplinary focus on biology, chemistry, mathematics, and physics.

“It’s a way to explain how the world works,” he said. “[Science] can make a connection between everything from a tree to a sky-scraper and helps you see the common thread that holds things together.” 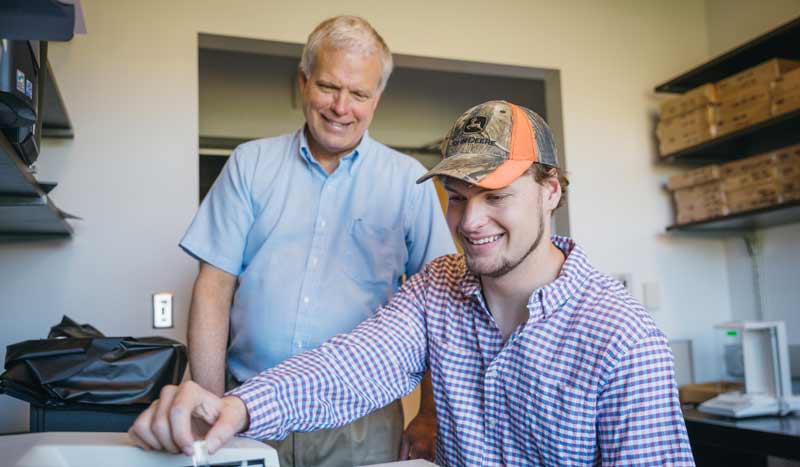 Boggs became particularly interested in synthetic organic chemistry through chemistry Prof. Donald Jameson. After taking Jameson’s general chemistry and organic chemistry course, Boggs became a Peer Learning Associate. This past summer, he worked in Jameson’s lab with a team of three other students on enzyme kinetics research. The project focused on making new organic molecules and determining whether they’d act as inhibitors for enzymes.

The process was really interesting because it was the first time I had the chance to do original research and solve a problem that no one knows the answer to,” said Boggs. “When you’re writing papers, you’re finding literature and sources to cite. But this was an opportunity to become the literature—to become the people and research that someone else looks up to cite.

As part of their research project, Jameson asked Boggs and another research student, Julia Harper ’17, to make a series of new organic molecules, which they completed with several weeks still left in the summer.

“So, I thought let’s try to see if they are good enzyme inhibitors,” said Jameson. “I’m a synthetic organic chemist—I can make molecules. But the enzyme inhibition experiment is a biochemical experiment that I have never done.”

Although Jameson had never done the experiment, he knew Boggs and Harper would know how to complete it, having both taken the biochemistry course.

“So, I told Cordell and Julia to figure out how to do it with our molecules and the enzyme we wanted to study,” said Jameson. “They had to work out quite a few kinks in the experiment before it worked really well, but eventually they got some really good data. And with very little guidance from me.”

For Boggs, who enjoys being a member of a team, a major worry was that working in a lab would feel isolating. But through his summer research experience, Boggs learned the opposite was true.

“Before this summer, I thought research was one person doing one thing and another person doing another—you’re there together, coexisting, but you’re not really working together,” Boggs said. “In reality, we collaborated, came up with ideas together, and designed experiments together. The ability to rely on those other people and work together to solve this problem—it was a big thing I wasn’t expecting.”

A family for life

As a senior, Boggs is leaving his career options open but is interested in potentially pursuing pharmaceutical research. He also plans to marry his high school sweetheart next year.

I don’t know what I would have done without that support network of the football team,” Boggs said. “I say support network, but I should probably say family. The upperclassmen took me under their wing and showed me how to lead and how to play football. The underclassmen provided me with the opportunity to mentor. And the seniors now, my class, are some of the best friends I’ve ever had. I’m sure some of them will be at my wedding because it’s that kind of crazy connection that you always hear about. It’s a lifelong connection.