Historic locations like Gettysburg inspire those who visit them. It compels them to ask difficult questions, engage in the events that transpired there, and apply the concepts they learn to the work that those events have left unfinished.

No one understands this better than Supervisory Historian for Interpretation and Education at the Gettysburg National Military Park and College alumnus Chris Gwinn ’06. In fact, these were the themes that Gwinn spoke to incoming students about during the College’s annual First-Year Walk.

The Walk—which is in its 14th year—recreates the moment in 1863 when members of the College community accompanied President Abraham Lincoln to the dedication of the Soldiers’ National Cemetery, where he delivered the Gettysburg Address. It also welcomes new students and engages them in the history that intertwines both the College and the town.

“The Soldiers’ National Cemetery [is] the final resting place of over 3,500 Union soldiers who, on this battlefield a century and a half ago, sacrificed their lives,” Gwinn told the audience of new and current students, College faculty and administrators, and community members. “For the next four years, wherever you go, and whatever you do, be it on the campus of the College, in the community that surrounds it, or on your National Park that preserves that battlefield, you do it in their shadow.”

Gwinn has a strong awareness both of this history and of the impact it has on one’s experiences at Gettysburg College. A history major, Gwinn participated in the Civil War Club while he was on campus, and cites his experience at Gettysburg as helping him turn his passion for history into a career.

But his journey started in much of the same way that it did for this year’s incoming class.

“I remember unloading my belongings in my dorm on the third floor of Paul Hall, and thinking that I had, perhaps, made a very great mistake. And perhaps there are some of you who feel that same way this evening,” Gwinn said. “Looking back on that moment now, with the benefits and perception of more than a decade, I realize that that moment was the hinge of my life. It was the moment that everything that occurred after it swung upon.”

The reason why his experience was so impactful, he claims, was because of the opportunities and resources the College provides for students to do great work. And yet, like Lincoln’s great task, the great work that students do is up to them to define.

“Wherever you go at Gettysburg, you are surrounded by history,” Gwinn said. “By going to school here, you become, even if only in a small way, a part of that history. You are afforded the opportunity to contribute to it. I challenge you to find your ‘great task,’ define your great work, and in all that you do, to live greatly.”

Gwinn delivered the keynote address at the First-Year Walk and recited the Gettysburg Address. Gettysburg Mayor Theodore Streeter also spoke, presenting Seth Zimmann ’20 with a key to the town on behalf of his class.

“It was an honor and a privilege to accept the role as representative,” said Zimmann, a Gettysburg native who was surprised but happy to receive the invitation to accept the key on behalf of his class. “As a gift to the class, the passage of the key is symbolic of the mutual trust between the town and the incoming First-Years. They offer hospitality and a place to grow; it is our responsibility to return the favor with positive action and a proactive stance on community service.”

At the end of the evening, students received a commemorative coin from the Gettysburg National Military Park, recognizing the 100th year anniversary of the founding of the National Park Service. During his speech, Gwinn said that he hoped this coin served as a reminder of the night’s event and of the significance of the historic setting students find themselves learning in. 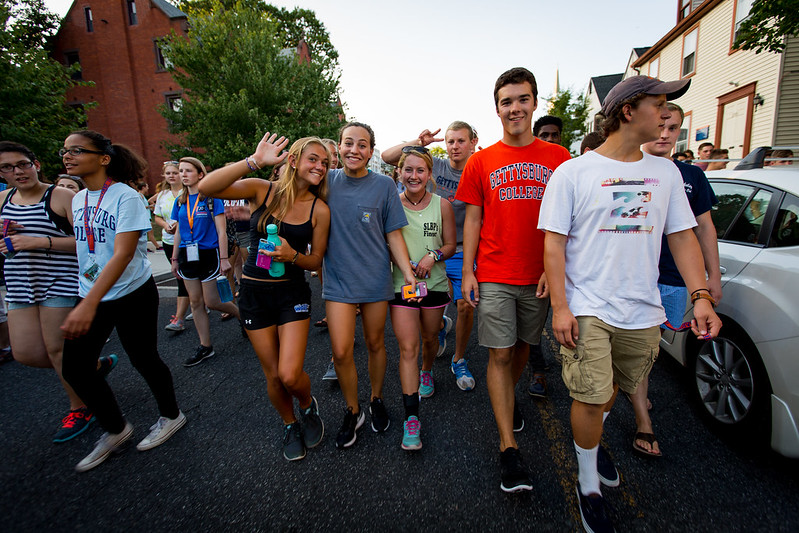