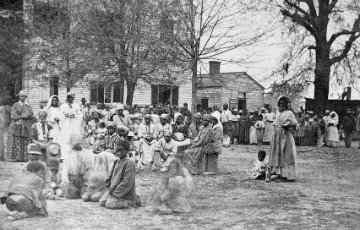 Amy Murrell Taylor is Associate Professor of History at the University of Kentucky. She is the author of Embattled Freedom: Journeys through the Civil War’s Slave Refugee Camps (UNC Press, 2018), as well as The Divided Family in Civil War America (UNC Press, 2005). Her research has been supported by fellowships from the National Endowment for the Humanities and the American Council of Learned Societies. Taylor has also served as a consultant for public history sites and is currently an editorial advisor for the Civil War Monitor magazine.

CWI: When did the first refugee camps emerge during the Civil War era? Where were they located, who managed them, and what were conditions like for those who fled to them? How did refugee camps vary by region and evolve over the course of the war?

TAYLOR: The very first slave refugee camps emerged in the war’s opening days, because it was just after Fort Sumter that enslaved people across the South began acting on their belief that this was the moment they had been waiting for their entire lives. The locations of the camps then followed the movement of enslaved people and tended to be located in the places where they found Union army commanders most friendly to their cause. That is why the coast of Virginia, especially in and around Fort Monroe, was the site of the earliest camps, in large part because of General Benjamin Butler and his decision in late May 1861 to see the Confederacy’s enslaved people as “contraband” of war – a pivotal moment that gave other sympathetic army commanders a rationale for allowing refugees from slavery inside Union lines.

It is difficult to generalize about the camps from that point on, because they constantly came and went, and they took many forms (large and small, urban and rural, collections of tents and semi-permanent villages). Sometimes the conditions were wretched and disease spread rapidly, as other historians, such as Jim Downs, Leslie Schwalm, and Thavolia Glymph have documented very well. Other times, though, the camps offered something closer to the beginning of a stable new life they had long envisioned, with schools, churches, stores, and most importantly, family reunited in shared spaces they had designed and built for themselves.

All of the camps were overseen by the Union army, which created a new bureaucracy for this purpose, with a “Superintendent of Contrabands” appointed in some places, or an entirely new “Department of Negro Affairs” created in others. The army, in theory, took responsibility for the provision of shelter and food rations, leaving clothing, schooling, and religion to the thousands of northern missionaries who began flowing into the South and into the camps. But nobody provided more for their survival than the refugees themselves, who not only found the relief offered by the army and the missionaries wanting, but who also had different ideas and visions of freedom that sometimes clashed with those of the white northerners. They preferred to grow their own food and sew their own clothes, for example, rather than have these things handed to them by paternalistic white officers. I was continually struck by all the ways in which these men, women, and children coming straight out of slavery managed to forge new lives for themselves in ways large and small – by setting up businesses and independent churches, by cultivating gardens, by pooling their money and purchasing land wherever they could. Theirs is a pretty stunning account of persistence and survival in the face of some of the most overwhelming odds.

But why was there such a variance in the conditions of the camps themselves? This is one important way in which the story of the refugee camps is inextricably linked to the military war: In regions that were relatively isolated from active combat, more permanent settlements could emerge; but in regions embroiled in military conflict these camps sometimes lasted only for a few weeks before being evacuated and destroyed altogether. The region where camps were most transient was the Mississippi Valley, not only because of the Vicksburg Campaign in 1863, but largely because of the persistent guerrilla warfare that continued in the years afterward. Some of the most harrowing accounts of a camp’s demise involved Confederate guerrillas, who targeted these embodiments of black freedom for some of their most savage violence. It was a preview of the racial violence would escalate in the postwar years.

CWI: How does your research into refugee camps challenge or enrich our understanding of emancipation and African Americans’ experiences during the Civil War? What sources have you mined throughout the research process?

TAYLOR: My research enriches one overarching finding shared by other scholars (although it needs amplification more broadly): That freedom did not come overnight to enslaved people and, in fact, it did not really “come” to them at all–they had to find it and seize it and make it their own. And this unleashed a process that did not end by the end of the Civil War but continued for decades thereafter. My research exposes this extended process of seeking freedom by shifting our vantage point out of Washington, D.C.—where so many studies focused on the emergence of the Emancipation Proclamation are centered—and into the plantation districts and cities of the South where enslaved people actually lived and made their first steps out of slavery. That ground-level view offers a striking window into the everydayness of seeking freedom, of simply trying to live and eat and keep one’s children safe, none of which was a given in a time of war.

And that is where my book offers a challenge, too. We have some wonderful scholarly work out there examining Emancipation as a political process, involving the formation of freedmen’s conventions and the push for suffrage; we are learning a lot more about the ways that newly freed people viewed citizenship and the duties and rights it entailed (Chandra Manning’s Troubled Refuge does an excellent job of that). But in the war years, in this earliest stage of the Emancipation process, I argue, physical survival was foremost in the minds of freedom-seeking people. In this respect I echo the work of those who have studied illness and death but turn additional attention to how most refugees from slavery managed to get out of the war alive. How did they eat? How did they sleep? Clothe themselves? Shelter themselves and their families? Those are the very basic social history questions that I ask in my book, and to answer them, I focus on the material world—on spaces, things, and structures. The methods of environmental historians, as well as cultural geographers and material culture specialists, proved instrumental in helping me probe this aspect of their lives. How they lived and how they moved forward from one day to the next is my focus.

To get at this story I looked at many familiar sources—army records, missionary records, census and vital records—but looked at them in different ways. I paid close attention to the most bureaucratic of military papers, such as lists of who received rations; I took seriously an otherwise bland order related to the issuance of lumber; and I lingered a long time over lists of provost marshal arrests. I have to thank, as any historian of Emancipation should, the Freedmen and Southern Society Project at the University of Maryland, which first opened my eyes to the vast potential of military records for exposing the everyday lives of freedom-seeking people. Do these sources get at the thoughts and words of enslaved people, I am often asked? Sometimes. Most of the time, though, the perspective of refugees comes filtered through the pen of the clerk taking dictation or summarizing their experiences. So this required reading the sources carefully, between the lines (or “against the archival grain”), to discern the motives and ambitions and cares of the refugee men and women themselves. That was a challenge, but exactly the sort of archival challenge to which I am drawn.

CWI: What light does your research shed on the influence of refugee camp experiences (material, political, cultural, social) upon Reconstruction and the postwar years? How might your research findings change the way academic historians and public historians interpret the Civil War? How might it reshape public memory of the long Civil War era?

TAYLOR: Many years ago, the historian Willie Lee Rose wrote a now-classic work on wartime Emancipation called Rehearsal for Reconstruction – and this title remains apt. The connections between what happened during the war and what happened in the period we call Reconstruction are so clear that they defy any clear demarcation of the end of one period, or the beginning of the other (as Greg Downs has effectively argued in After Appomattox).

In the specific case of the slave refugee camps, we can see the origins of the Freedmen’s Bureau in the army’s supervision of refugee affairs. But we can also get a new perspective on how one of the elements of the bureau’s work—land reform, or the provision of “40 acres and a mule”—utterly failed. The vast majority of the land on which these refugee camps emerged was land abandoned by the Confederates and seized by the Union army; in the year or two after the war the Union gave most of that land back to the ex-Confederates. That story is well known. But what is not well known is how this process evicted tens of thousands of men, women, and children from the spot of land on which they had begun building new lives in freedom. In a process that stretched from 1865-1866, the bureau and the army fanned out across the South and tore down the refugee camps, sometimes torching houses to make sure the people left. What this meant for the people is a story I tell in the book; at the very least, it’s a story of how the failure of land reform was not just a failure of a promise, or a dream denied, as it is so often described. It represented the actual loss of something very concrete and tangible that newly freed people believed they possessed. It was a loss of housing, of gardens, of possessions, of crops; at the very moment of Union victory and thus victory for abolition, refugees from slavery experienced profound losses that would plague them for years to come.

In addition to making that story clear, I hope my book will help reshape the public memory of the Civil War in other ways: By reminding Americans of the central position of slavery (because it cannot be reminded enough); by making it clear that slavery was not just a political issue that brought on this war—it was not just an abstraction—but instead a system that propelled hundreds of thousands of African American people into the Union army’s orbit, where they had an enormous impact on the war and the Union’s war effort; and by demonstrating that the military history of the war was therefore in no way separate from the process of Emancipation, but instead there was an interdependency between the two that started in the war’s opening days and persisted long after Appomattox.