Speaker Interview: The Civil War in the West 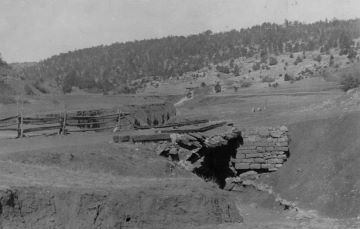 Megan Kate Nelson is a writer and historian living in Lincoln, Massachusetts. Her new book, The Three-Cornered War: The Union, the Confederacy, and Native Peoples in the Fight for the West, will be published by Scribner in February 2020. This project was the recipient of a 2017 NEH Public Scholar Award and a Filson Historical Society Fellowship. Nelson is the author of two previous books: Ruin Nation: Destruction and the American Civil War (Georgia, 2012) and Trembling Earth: A Cultural History of the Okefenokee Swamp (2005). She has also written about the Civil War, the U.S. West, and American culture for the New York Times, Washington Post, Smithsonian Magazine, Preservation Magazine, and Civil War Times. Her column on Civil War popular culture, "Stereoscope," appears regularly in the Civil War Monitor.

CWI: Your new book, The Three-Cornered War, is about the Civil War in the West, but you are not writing about what we traditionally think of as the Western Theater. So can you explain how do you define “the West” in your new book, and can you tell us why this “West” is important for understanding the American Civil War?

Nelson: As all CWI attendees know, the term “the West” is most often used to describe the Trans-Mississippi theater (engagements in Missouri, Arkansas, western Tennessee, Louisiana, eastern Texas, and Indian Territory). For this reason, most maps included in Civil War history books extend only as far west as central Texas, erasing roughly 40% of the nation’s landmass. Because what could be west of “the West”? What could have happened in a place that’s not even on the map?

In The Three-Cornered War, I redraw that map of the Civil War, extending it to the Pacific Ocean and including in it not only states and U.S. territories west of the 100th meridian but also the boundaries of Native homelands.

Most of the action in The Three-Cornered War takes place in Colorado, Texas, southern California, New Mexico, and the territory that became Arizona during the war. This region (the Southwest) was a gateway to the larger West in 1861. The Confederacy wanted to seize New Mexico to gain access to California’s gold mines and Pacific ports, and to establish a base for launching additional campaigns for the states and territories of the larger West.

Henry Hopkins Sibley, a career U.S. Army man who resigned his commission to join the Confederacy, had these goals in mind when he invaded New Mexico Territory with a brigade of  3,000 Texans in the winter of 1861-62. Union colonel E.R.S. Canby brought together an army of regulars and Anglo and Hispano volunteers to defend New Mexico against this incursion.

In their subsequent clashes, both armies marched and fought through Native homelands. These communities—Chiricahua and Mescalero Apaches and Navajos, in particular—exploited this fight between the Union and the Confederacy early in the war, siphoning animals from army wagon trains and camps and retaking territories they had lost to American military and civilian settlement in the 1850s.

Once the Union defeated the Confederates and drove them back to Texas in the summer of 1862, federal troops under James Carleton turned their attention to defeating Apaches and Navajos. In order to fully win the West during the Civil War, the Union had to wrest its lands from indigenous peoples. The second half of The Three-Cornered War tracks these events through the experiences of Navajos, Chiricahua Apaches, and 1st New Mexico and 1st California soldiers who engaged in these fights.

Approaching the history of the Civil War from this often overlooked (and sometimes dismissed) vantage point reveals surprising elements of the conflict, among them that:

It is my hope that The Three-Cornered War will encourage students and scholars of the Civil War to think more broadly about its history—and that we will start referring to the theater from the Pacific to the 100th meridian as “the West”, and to the Trans-Mississippi as, well, “the Trans-Mississippi.”

CWI: You tell the story of the Civil War in the West through nine major characters. What drew you to this methodological approach? How did the variety and accessibility of source material affect your decision? What did you learn from creating a narrative in this way?

Nelson: When I started to research the Civil War West and realized how many different campaigns there were and how many communities were involved, I faced a narrative challenge. I wanted to make sure that readers would understand the complexity of all of their actions and motivations, but I also wanted to give readers a more personal connection to the people engaged in the battles in this theater in the 1860s.

I was reading a lot of fiction at the time, and had noticed a new trend in storytelling: the multi-perspective narrative in which the reader sees events occurring from several different viewpoints.

I wondered if I could take this narrative strategy from fiction, and use historical sources to shape it. It took a while to find all 9 of the people whose stories I tell in The Three-Cornered War. I chose people whose experiences during the war were representative of their communities. But they were all also somewhat exceptional, in that they either wrote enough about their experiences to help me paint a full picture of them, or they were well-known enough that other people wrote about them.

James Carleton (the Union brigadier-general in command of the Department of New Mexico after 1862) for example, produced the most material of any of the people whose stories I tell in the book. He wrote sheaves of letters, reports, and orders every day, and the local newspaper often wrote about him, his policies, the parties he went to, and the trips he took.

Juanita, on the other hand, was a Navajo woman who left no written words behind to describe her life. But she did leave the textiles she wove, and descendants to tell her story. She was also married to Manuelito, a prominent Navajo headman, and I was able to pinpoint her movements during the Civil War through the Union Army’s attention to his whereabouts in their records.

Interweaving all of these narratives together was demanding - but it was also really, really fun. I have written two previous books (Trembling Earth (Georgia, 2005) and Ruin Nation (Georgia, 2012), both traditional scholarly books with argument-driven, thematic structures.

In The Three-Cornered War I needed to let the plot drive the narrative, and integrate my arguments seamlessly into both specific and larger stories. Ultimately, my hope is that The Three-Cornered War gives readers the fullest possible sense of the Civil War in this region, while also giving them a really good read.

What I have learned in this process is that writing history is always an act of imagination, even if you are writing in a more traditional way. Historians take the materials that we have to generate a sense of the past for ourselves and for our readers, and that is, fundamentally, a creative act.

CWI: You write about Hispanic civilians and soldiers as well as Native American Indians. How do their relationships with Union and Confederate authorities and issues of race and ethnicity affect military operations in the West?

Nelson: This is one of the other meanings of the title of my book: a California soldier used the phrase “three-cornered war” to describe the battles between the Union, the Confederacy, and Native peoples. The title also refers to a war involving the North, the South, and the West, and to a series of battles fought by Anglos, Native peoples, and Hispanos.

The Union’s Army of New Mexico was the first multiracial army in the Civil War. Hispano volunteers fought in the 1st New Mexico as well as in militias. They marched and camped and fought alongside Anglo volunteers and Army regulars, and Native scouts from several different communities (Utes, Jicarilla Apaches, and Mescalero Apaches). They fought in engagements against the Confederate Texans at Valverde in February 1862, and against Chiricahua Apaches, Mescalero Apaches, Kiowas, Comanches, and Navajos in campaigns in 1863-1864.

Many Hispanos volunteered for the Union army to defend their towns, ranches, and families from invading Texans. Those who stayed on after the Texans retreated did so to join campaigns against Apaches and Navajos, whom they had been fighting in a longstanding cycle of raiding and warfare for generations before Americans’ arrival in the region.

It is important to remember that Hispano New Mexicans’ engagements with Union and Confederate forces were not monolithic. Neither were the actions of indigenous peoples.

Many Native communities in the region traded with the Anglos in their midst and made peace treaties when it suited them. They raided military forts, corrals, and wagon trains when the opportunity arose. Some, as I have noted above, worked as scouts in Union Army campaigns, mostly in fights against other indigenous peoples who were their traditional enemies. They did all of this to express and secure their sovereignty as a people, and (re)gain control over their homelands.

In the Southwest, Chiricahua and Mescalero Apaches and the Navajos were the communities who engaged most in warfare with Union troops, because it was their territories that the Union Army most wanted to control in New Mexico and Arizona.  They were important thoroughfares for trade and American settlement in the Southwest. They also provided access to mountain gulches and streams that could be panned for gold. In the summer of 1863, after gold was discovered in the mountains of the newly created Union Territory of Arizona, American and Mexican miners flooded into the region.  James Carleton subsequently tapped Joseph Rodman West to drive the Chiricahua Apaches from the Butterfield route, and Kit Carson to lead a hard war campaign against the Navajos to clear the way for miners heading west from Albuquerque.

Attention to the West leads us to rethink the Union government’s plans for the future. The Army’s Indian policy under James Carleton was to forego the treaty process and to make war upon Native peoples in order to force their capitulation and removal to reservations. Navajos and Mescalero Apaches became prisoners-of-war in this context, incarcerated on reservations that were far from their homelands. So while the Union Army was fighting for black emancipation in the East, they were fighting to force the migration and imprisonment of Native peoples in the West.

Considering the Hispano and Native dimensions of the Civil War, then, complicates our understanding of the Union Army’s “just war,” and illuminates the multiple and often contradictory elements of “the Union Cause.”