Noteworthy: The 'Resilient' Return Of The Orange And Blue

After an extended pause in competition due to the COVID-19 pandemic and a long-awaited approval to resume play from the Centennial Conference on March 5, 2021, the Gettysburg College Bullets returned to play.

“After a year without competition, I am happy that we will now have the opportunity for our spring student-athletes to represent the Orange and Blue in the sports they love,” said Executive Director of Intercollegiate Athletics Mike Mattia. “All of our teams, coaches, and support staff have been extremely resilient and have worked really hard to help put us in this position.”

Of note, softball captured its fifth conference title and advanced to the NCAA Division III regional championship, led by Shelby Baker ’21, the program’s all-time leader in home runs. Men’s golf swept the conference’s major awards: Player of the Year Quinn Greene ’21, who won the individual Centennial title; Rookie of the Year Cameron Deiuliis ’24; and Co-Coach of the Year Nate Davis. In women’s lacrosse, Kerry McKeever ’21 and Caroline Sullivan ’24 were also named Offensive Player of the Year and Rookie of the Year, respectively.

Although the basketball season was canceled, Meredith Brown ’21 walked away with Academic All-America Third Team recognition and was selected as the Clair B., Mary E., and Constance Noerr (Baker) Memorial Award winner, presented to a female senior on the basis of proficiency in athletics, scholarship, and character. Jack Edelson ’21 from the men’s swimming program was presented with the Charles W. Beachem Athletic Award, which goes to a male senior on the basis of character, scholarship, and athletic achievement.

With these successes this spring, the Gettysburg College community celebrated together with an eye toward the future. On June 25, the Centennial Conference announced it anticipates a full return to competition for the 2021-22 academic year.

How to be successful on your first day of classes

The Class of 2026 takes flight at Gettysburg College 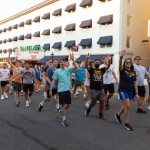