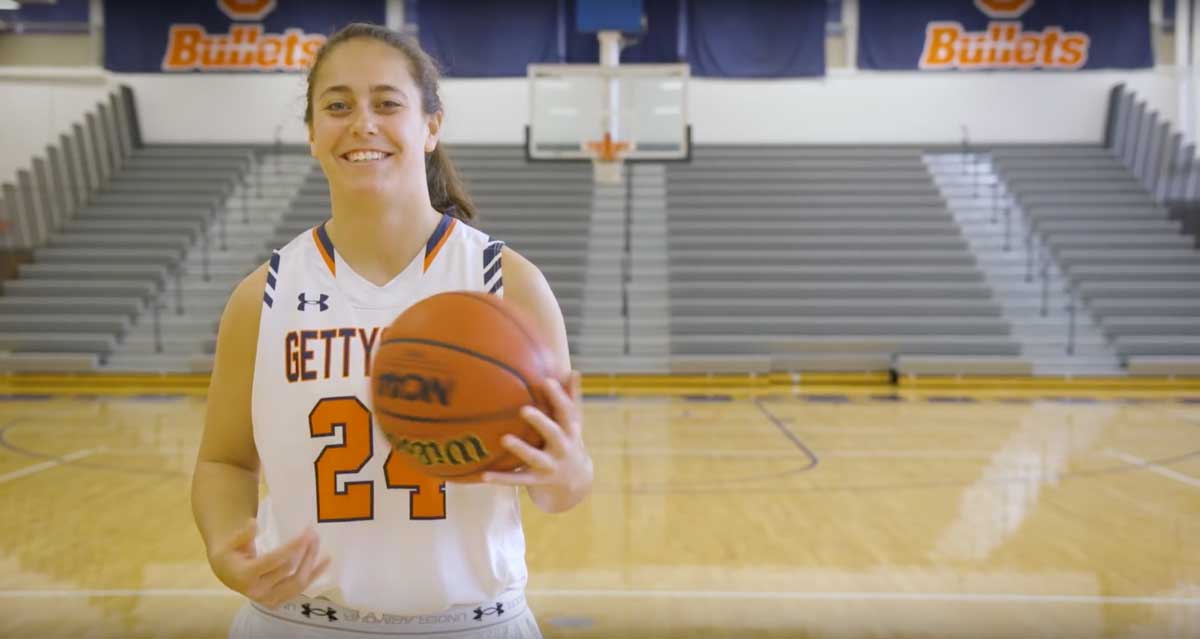 During a remarkable first-year season—ultimately earning her Centennial Conference Rookie of the Year honors—Emily Gibbons ’18 found herself thrust into a leadership role on the Bullets basketball team.

Gibbons understood that leadership means much more than consistent play on the court, however, and that navigating the complexity of leadership would not be easy, so she turned to the Garthwait Leadership Center (GLC) for guidance.

In an effort to evolve her leadership strategies, and put this knowledge into practice in the real-world, Gibbons chose to participate in the Gettysburg College Leadership Certificate—a customizable yearlong program designed for any student, regardless of class year, to grow into a leader of action and integrity through the guidance of a trained leadership coach.

In 2018, Gibbons led the Bullets to a Centennial Conference championship, as well as a trip to the NCAA Division III tournament. Following her successful senior season, she was named the Centennial Conference Player of the Year and D3hoops.com All-American for the second year in a row. Today, Gibbons is Gettysburg College’s all-time leader in rebounds (1,012), rebounding average (9.8 rpg), defensive rebounds (722), and defensive rebounding average (7.0 rpg).

Watch the video to learn more about her story.

Emily Gibbons: I remember the first time I put on a Gettysburg jersey and it was just one of the coolest experiences. It felt like I’d finally accomplished something that I’d worked so hard for all my life. As a first-year student, taking on a leadership role was very different for me. I didn’t really want to step on anyone’s toes but my coach and teammates were encouraging me to step up and lead more on and off the court. They wanted me to get more involved and become more of a leader.

Andy Hughes: The Gettysburg College Leadership Certificate is a one-year program that pairs a trained leadership coach with a student to help them develop their leadership and career skills.

Emily Gibbons: I made the decision to participate in the leadership certificate program because having the opportunity to better my leadership skills as only a sophomore, I felt like I needed to take advantage of the opportunity.

I think some of the toughest things with leadership or how hard it is to sometimes motivate people to all move in one direction towards a common vision, in many cases we have to make the tough decision that isn’t necessarily the most popular decision. Having knowledge of the different types of leadership has helped me because then I can connect with teammates on different levels and understand what motivates them and what’s going to work best for them. Some of my teammates, I think it’s better to talk to them when I'm in the gym shooting with them, whereas some of them, it’s better to just go grab coffee or lunch.

Andy Hughes: It’s hard to be able to consistently live your values every day but we make sure to raise that up in the certificate so that no student who graduates with this certificate doesn’t consider 'what my values are' and 'how I want to lead' based on those— and practice those in a congruent way so they do what they say they're going to do.

Emily is a great example of what the leadership certificate is all about. She was able to recognize her potential and develop into a leader, not only on the court but off the court.