Social media was aflutter with the coming of spring and big news across campus, including the return of an in-person Get Acquainted Day, the College’s 190th birthday, and the announcement of a new online master’s program.

The first in-person Get Acquainted Day in three years welcomed throngs of prospective students and their parents to campus with support pouring in from social media followers:

“It was a great day! Thank you Gettysburg, for the extremely warm welcome for all the 2026 students! Loved the breakfast spread, the pep band, the club fair, lunch in the dining hall, the tour around campus, and the faculty talks. Super informative and the school spirit was evident—the blue and orange wear was fabulous! 🧡 💙 ”
– Laura Maduzia Nolan P’26 | Instagram

As the Class of 2022 graduated, Director of the Johnson Center for Creative Teaching and Learning and Health Sciences Prof. Josef Brandauer shared his thoughts about our beloved tradition on Twitter, from what it takes to build meaningful mentorships to the simple power of a professor’s presence in a student’s life. Head to Twitter to read the full thread.

“At @gettysburg, part of Commencement ceremonies is that graduating students receive a Stole of Gratitude. They are asked to bestow it to someone who made their college career possible and/or better: friends, family, College employees. I think it’s a beautiful tradition.”
– Prof. Josef Brandauer (@BrandauerJ) | LinkedIn

“Super excited to continue this program from Pace to Gettysburg. It’s been a great program so far!”
– Kevin Podeweltz, friend of the College | Facebook

“Are there plans to expand the graduate offerings in general at Gettysburg? … I’d also love to continue my education, and if I could continue with Gettysburg, I would love to!”
– Sarah Oppenheim ’14 | Facebook

“The College is in conversations about the possibility of expanding the MA in American History to Gettysburg alumni in future years. Stay tuned!”
– Gettysburg College | Facebook

History Prof. Michael Birkner ’72, P10 was quoted in a History Channel piece on James Buchanan’s presidential shortcomings, which has led many historians to consistently rank him as one of the worst U.S. presidents. In the article, Birkner shared that in addition to being sympathetic to Southern slaveholders, Buchanan wasn’t very in tune with popular opinion in the North. “He is not the right man at the right time to be president of the United States,” Birkner said.

The Gettysburg Times reported that Jen Bryant ’82 was the keynote speaker for the 2022 Callie Awards for the Exceptional Women in Adams County virtual award ceremony. Bryant is a member of the College’s Board of Trustees and author of the biography “Fall Down Seven Times, Stand Up Eight,” which is about Patsy Takemoto Mink, the first woman of color and the first Asian American to be elected to the U.S. Congress.

Susan Eisenhower, the founding director, chairman emerita, and the first president of the Eisenhower Institute at Gettysburg College, was a guest on the Art of Manliness podcast. The episode explores President Dwight D. Eisenhower’s legacy of leadership, using Susan’s book “How Ike Led” as a jumping-off point.

Political Science Prof. Douglas Page was quoted in an AP News article about Russia’s invasion of Ukraine and what it says about the current state of democracy. Page also served as an expert source in a Newsweek article, suggesting that while evidence may emerge about Vladimir Putin’s mental instability, we should also consider the persona that Putin may be crafting during this time.

Jewish Studies and Interdisciplinary Studies Prof. Stephen Stern wrote a column for the Times of Israel, reflecting on the person who inspired him to teach at Gettysburg College—retiring Religious Studies Prof. Charles (Buz) Myers Jr. P’09. Furthermore, Stern shared how Myers has dedicated his four decades at Gettysburg to helping ensure living Jewish voices aren’t absent from academic discussions or curriculums, and more broadly, caring about all people—having a particularly big heart for his students.

Philosophy Prof. Steven Gimbel co-authored a commentary piece for Salon about Ivan Reitman, the former director and producer of “Ghostbusters,” “Meatballs,” and various other well-known films, who recently died. In this piece, Gimbel and his co-author explore Reitman’s life, framing him as a leading cultural voice of Gen X nihilism during the late 1970s and early 1980s.

Distinguished alumna Mary Carskadon ’69 was featured in a podcast episode by The Academic Minute. Carskadon is a renowned researcher on sleep who serves as director of the E.P. Bradley Hospital Sleep and Chronobiology Research Laboratory and is a professor of psychiatry and human behavior at the Alpert Medical School of Brown University in Rhode Island. In the episode, Carskadon speaks about changing sleep patterns during early adolescence, particularly analyzing how COVID-19 affected sleep during the height of the pandemic.

A Legacy of Leadership

The Office Door That Never Closes

Perspectives: On The Topic of Purpose 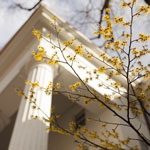