In a town filled with figurative sculptures of men from the Civil War, Sentinel, as a non-representational sculpture, can be seen as quite confrontational. Its abstract form and modernist insistence on materiality sets Sentinel apart from the dominant motifs in Gettysburg, Pennsylvania.

Sentinel’s creator, Martin Puryear, believed its design would educate and spark interest in modern art for those who equate “good” sculpture with recognizable human figures. Sentinel encourages people to see the sculpture without any preconceived notions of what art and sculpture is supposed to be and instead try to understand the medium on its own terms.

During the summer of 2021, as part of the Kolbe Fellows Program––Gettysburg College’s 10-week faculty-mentored student research program––I had the pleasure of curating the art exhibition titled, “Martin Puryear: 40 Years Since Sentinel.”

As the title reveals, this project was sparked under the premise that Sentinel, the sculpture on campus built by Puryear, was approaching its 40th anniversary. In addition to Sentinel, Gettysburg College had acquired two prints by Puryear and loaned a third print from a private collection for the exhibition. The exhibition would also feature part of the wooden mold Puryear used to construct Sentinel and photographs taken of the installation process on campus in 1982.

Martin Puryear is an acclaimed sculptor with an impressive career spanning decades. Puryear has participated in many renowned exhibitions and received a number of prestigious grants and awards throughout his career. For instance, Puryear’s works have been featured in various museums, including the Museum of Modern Art and The Smithsonian American Art Museum. In 2011, he was also awarded the National Medal of Arts by President Barack Obama. Puryear is now regarded as one of the most important sculptors working today, and Gettysburg College’s Sentinel is a foundational part of the artist’s enduring legacy.

With the intention of commemorating Sentinel’s anniversary, my project’s goals included archiving the history of how Gettysburg College was able to commission a sculpture from Martin Puryear, bringing awareness to the sculpture, and contributing to the art history field by further developing the existing research and scholarship on Puryear and connecting Sentinel to his oeuvre.

While the Kolbe Fellows Program would usually take place on campus during the summer, due to COVID-19, the Summer 2021 program was a hybrid version. Therefore, I did most of my research for the exhibition from my home in California.

Part of my research included studying primary sources. Ranging from correspondence between Gettysburg College and the National Endowment for the Arts (NEA), to news articles documenting the process of Sentinel, and even notes taken during meetings when the artist was being selected. With the mentorship of Prof. Shannon Egan, director of the Schmucker Art Gallery, I also had the pleasure of meeting Nicholas Micros ’82. Micros assisted Puryear in building Sentinel. He kindly met with Prof. Egan and I over Zoom, and he shared with us his insights as someone who assisted Puryear in the Sentinel creation, as well as the impact the experience had on him personally as a Gettysburg College graduate and artist.

Despite the distance, there wasn’t a moment when I didn’t feel supported during the research process. I met frequently over Zoom with my advisor for the project, Prof. Egan, and Dean Maureen Forrestal, to ensure I was on track. I am incredibly grateful to the staff at Musselman Library’s Research Desk, as I was able to find and access great sources for my research. Carolyn Sautter, director of Specials Collections and College Archives, assured me that I had access to the Puryear prints and wouldn’t miss any details that weren’t visible through Zoom. The College’s faculty were likewise supportive and essential in the completion of this project.

As my summer vacation came to an end, I wrapped up the final draft of the catalog essay and prepared to come back to campus. As school rolled in, the exhibition’s installation process began and preparations for the opening of the exhibition were finalized.

On September 10 the exhibition opened, and it was complimented with an exhibition catalogue and a gallery talk. 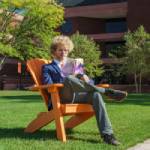