Eyes on the Middle East

Through The Eisenhower Institute, students get a first-hand look at the contrast and complexity of the contemporary Middle East

Arriving in Israel after a 12-hour flight from the United States, Gettysburg students pile into the bus that will take them to their hotel. A man in T-shirt and jeans greets them. His name is Avi Melamed. Melamed, he will later explain, means “teacher” in Hebrew. The name fits both his personality and profession. He is the group’s teacher and the leader of the Inside the Middle East (ITME) program of The Eisenhower Institute at Gettysburg College.

“Welcome,” Melamed says, gesturing to the first glimpse of Israel’s landscape through the bus windows.

Pride lights up his face, and it’s clear the students can feel it, despite their fatigue from the flight. Melamed is an expert on the Middle East—a former Israeli intelligence official and senior official on Arab affairs. Israel is where Melamed grew up and where he lives. It’s home. So, to see Melamed’s sky means to understand that the complexity of the Middle East is not just about learning history or even about understanding conflict. It is also about understanding the people who live there now and the humanity that ties all people together. ITME is a year-long program that begins on the Gettysburg campus and culminates in a learning tour in the region. Its uniqueness lies in preparing undergraduates with the analytical skills necessary to approach a contemporary understanding of the Middle East. The trip to Israel provides students with first-hand experience and the opportunity to hear a variety of perspectives from those they meet.

Enrollment in the program is competitive, and the high demand by students is a testament to its quality. Students do not receive academic credit. The size of the group is intentionally small, like a seminar of 12 to 15 students. Participants come from a variety of backgrounds and majors, including environmental studies, computer science, political science—any Gettysburg College student may apply. Throughout the year, the group attends
discussions with Melamed, learning the language of the intelligence community and necessary skills, such as how to evaluate the credibility of various platforms of information and how to write intelligence bulletins and reports. Melamed emphasizes media literacy and developing critical thinking ability, leadership, and inquiry skills.

The group also talks about major conflicts in the Middle East, like the Arab Spring, and the dynamics of the region, like political Islam and the Iran-Arab power struggle. They complete a formal intelligence report and presentation. Examples of titles from last year’s projects include: “Chinese militants of ISIS,” “The Hamas-ISIS connection,” “Turkey and the Kurds on escalation course,” and “Troops move to defend South Yemen.” The learning tour at the end of the academic year is an optional opportunity that ties it together and makes the learning tangible. “The importance of the tour in the context of the program is significant,” said Melamed.

“It provides the three-dimensional picture of the Middle East. Standing on the Israeli part of the Golan Heights, only 25 miles from Damascus, seeing and hearing the sounds of war taking place in Syria; visiting the area around the Gaza Strip and meeting with people living in that area; looking closely at symbols which define religious, cultural, political, and personal identities in Jerusalem; talking with young Israelis and Palestinians, eye to eye, about issues of identity in the shadow of a conflict—these are all experiences that can be achieved only in person.

“The total experience of the year-long program on campus, plus the educational tour, offers students the ability to further widen their lens when looking at the Middle East reality.”

Israel is about the size of New Jersey, and the group tries to see and experience as much of the area’s culture as possible in 10 days. They do the expected—visit the Old City of Jerusalem, tour religious sites, visit local markets, attend a traditional homemade Shabbat dinner—but the meat of the trip consists of the unexpected, including daily briefings on the region by Melamed and conversations with Israelis and Palestinians of diverse backgrounds and perspectives.

The days are packed, long, and never dull. The itinerary is designed to provide students with the wide array of perspectives of people living in the region. Many of the people they meet are connections Melamed has made over the course of his career. And many of the places the students go would be out of the comfort zone and reach of average travelers—including visits to the Palestinian territories and politically and militarily significant areas like the border of Lebanon and the Golan Heights, on the border of Syria.

“It is important for students to see a direct, non- littered approach to people on both sides and to be exposed to multiple narratives,” said Melamed. 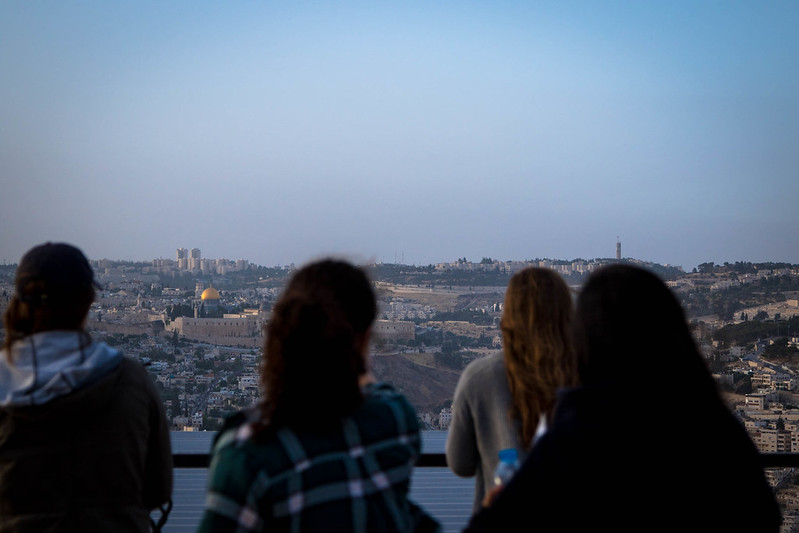 “This is a region that defies the idea of a single narrative. After every meeting we had in Israel, I thought I had the full picture, and then we’d meet someone else who’d shake up that picture,” said August Umholtz ’18, a computer science and public policy double major from West Newbury, Massachusetts. “It’s important not to ignore the human element—everyone has an emotional state,” said Micaela Edelson ’17, who is an environmental studies and public policy double major from Oregon. “To understand conflict, you need to listen at the personal level. Everyone’s experience is unique, so that’s the best way to get an all-encompassing perspective.”

Several students said the trip to Israel allowed them to get a more complete picture of the region, and that the in-person meetings were important. One example: in 2003, the government of Israel built a wall separating the West Bank from the rest of Israel, saying that it was necessary to prevent suicide bombers from carrying out attacks on Israeli citizens. On the trip, students heard from speakers who referred to the wall as a “security fence” necessary for protecting lives. Others referred to it as a “land grab” and “separation wall” intended to separate and alienate people. These kinds of subtle politics are learned from people and language, not from books. Participants learn about the formation of The Ramon Crater, or Makhtesh Ramon, a prominent feature of Israel's Negev desert.

Toward the end of the trip, the group traveled to Sderot. Sderot is a city and former development town in the western Negev, located less than a mile from Gaza. Over the past decade, Sderot has been hit by more than 8,000 rockets and mortars. On the trip, the only visible clues of danger were the concrete bus stops that double as bomb shelters, placed at frequent intervals along the streets. Lunch was at a sun-bleached restaurant with a breezy, seaside-like feel—despite being in the desert.

Afterward, the group met with Anat Maoz, and her husband, Itai, in the common space of Kibbutz Nahal Oz. The sunny patio had the same easy feel as the restaurant. Less than 1,000 yards separate the kibbutz from the Gaza Strip, where the scene is much different: building rubble, dust, dirt, and the dismantled remains of buildings formerly used by Hamas to shoot rockets. Hamas, a Palestinian Sunni- Islamic fundamentalist organization, controls the Gaza Strip. Sitting on pillows, watching flowers sway in the breeze as Maoz talks, it’s hard to believe that only two years ago a four-year-old boy was killed here, from a mortar attack initiated by Hamas. In 2014, nineteen families left the kibbutz for good, fearful of more attacks. In 2016, twenty new families have moved in.

“This place is coming back from a place of darkness,” Maoz said. “I believed in coming home even though it could cost me my life.”

In contrast to the lightness that marked his welcome of his students to Israel, here at the kibbutz, Melamed grew serious and reflective. Here, he asked students to reflect on this juxtaposition of violence and peace—on the short distance between normal life and unexpected tragedy in Israel and the Middle East.

“This is the lunatic reality,” he said. “There are real people on both sides of the conflict here,” he said. “And breaking circles of hatred requires people working from all circles, from bottom-to-top and top-to-bottom.”

Inside the Middle East is a program designed to cultivate understanding of these complex issues and prepare students to be leaders who can make
a difference. And so Melamed’s comments were a call to action for the future work taking place in his home, under his sky.

The ITME program is less than five years old, but alumni and students are applying their experience to employment, internships, and continued study. See what ITME alumni are doing now.

The ITME program and learning tour are supported by gifts from generous donors. Learn more about supporting the Eisenhower Institute.