The connections students make at Gettysburg College are lifelong and all-encompassing. Whether it’s a connection between peers who share similar interests, a faculty member who serves as a mentor to a student, or an alum initiating a career-launching connection, our Gettysburg Network is decades deep and has positively influenced the lives of countless students.

For the Flanagan brothers, Ryan ’10, Connor ’12, and Matt ’15, the connections that they each cultivated at Gettysburg have remained foundational throughout every step of their career journeys. From pursuing internships, to attending medical school, and strategically elevating their careers, the Gettysburg Network has given them many avenues to pursue their passions in the work that they do.

After graduating from Gettysburg College, Ryan, a psychology major and sociology minor, worked briefly at a psychiatric hospital before completing a post-baccalaureate program at New York University and attending medical school at Georgetown University, from which he graduated in 2018. Currently, he’s in a residency program in the Bronx.

“Gettysburg, and the friendships I made there were probably the biggest source of support for me in the form of guidance as I was making that transition to go back to medical school,” Ryan said. “We were all sort of in this together—bouncing ideas off each other, working on applications together, and studying for exams together. It was a pretty invaluable experience.”

Experiencing the effects of strong Gettysburg connections in his life, Ryan served as an initial connection and voice of reason for Connor and Matt when they began searching for colleges. After attending school in Boston for a year, Connor made the decision to transfer to Gettysburg College to study organization and management, and a few years later, Matt, who also studied organization and management, minoring in business, chose Gettysburg College, too.

“Where I transferred from, I knew I could do well without putting in a lot of work, whereas Gettysburg was a very challenging and rewarding experience. I really had to try to do well in classes and collaborate with my peers and professors,” Connor said. “The ability to meet and interact with different people has allowed me to be successful. Everyone has different thoughts and opinions in Gettysburg, and that’s the beautiful thing about a liberal arts education—people bring different perspectives to the table.”

Learning how to work collaboratively and knowing how to build and utilize connections are two core competencies that help professionals navigate their career paths, regardless of the field they choose to pursue, because they open doors to opportunities and advancements. Not only did this connection-centered mind lead Connor to an internship at the consulting firm McLagen, but it also led to continued conversations with the Center for Career Engagement, which connected him to a career-launching program at AT&T, made possible by Jack Duffy ’79. There, he gained two years worth of experience with business-to-business sales in seven months. The intensive training at AT&T prepared Connor for a strategic progression to his current management position at Skyword, a marketing and advertising agency.

Similar to Connor, Matt’s first of many experiences with the Gettysburg Network was an alumni-connected externship at Omni Cable. Having graduated from Gettysburg only four years ago, Matt is still building his career in accounting, and he knows that when he’s ready to make his next career move, he has many options because of the Gettysburg Network.

“What makes the Gettysburg Network so incredible is that they’re not just there for you while you’re in school, they’re also there after you graduate too,” Matt said.

Showing his appreciation for the Gettysburg Network, Connor has attended several job fairs as an employer to recruit Gettysburg College students. Ryan and Matt hope that they too can be a source of connections for students and alumni, because they recognize that Gettysburg College is more than a place to get a degree—it’s a growing network and a community with a heart to give.

“The key is to not be afraid to ask for help because nobody can really do it all on their own,” Connor said. “I’ve noticed that the Gettysburg alumni network is really open, willing, and able to help out others, because more likely than not, they received help from an alum in the past, and they want to do the same. It’s true for me, and it’s true for my brothers.”

Read more about how the Gettysburg Network has positively impacted the lives and careers of other Gettysburg College students and alumni. 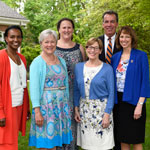