Harold Holzer, a prominent writer, scholar, and award-winning Lincoln expert, will speak at this year’s Dedication Day ceremony. The event—which commemorates the dedication of the Soldiers’ National Cemetery following the Battle of Gettysburg and the delivery of Abraham Lincoln’s Gettysburg Address—will be held on Sunday, November 19.

At 10:00 am, the day's events will begin with the wreath-laying ceremony at the Soldiers' National Monument, followed by the Dedication Day program at 10:30 am at the rostrum in the Soldiers' National Cemetery. In addition to Holzer’s keynote address, Gettysburg College President Janet Morgan Riggs ’77 will give remarks, and the U.S. Citizenship and Immigration Service will hold a naturalization ceremony for citizen candidates. Anyone unable to attend the ceremony in person can watch via livestream.

“I am deeply honored to be asked to stand where Abraham Lincoln stood—and speak from where he spoke—on the hallowed ground at Gettysburg,” said Holzer, the Jonathan F. Fanton Director of Hunter College's Roosevelt House Public Policy Institute in New York City.

“A lifetime spent studying Lincoln’s words and images cannot begin to prepare one for this emotional and intellectual challenge. I can only hope my efforts will fall somewhere between ‘little noted’ and ‘long remembered,’ to paraphrase the President to whom we will pay tribute on November 19. Especially because we face such challenging times in modern-day America, I look forward to returning to a town I love very much, and for an event so deeply imbued with historical meaning and national purpose.”

In addition to his work as a professor, Holzer has authored, co-authored, or edited 52 books. He recently received the prestigious 2017 Empire State Archives and History Award from the New York State Archives Partnership Trust. His latest major book, Lincoln and the Power of the Press: The War for Public Opinion, won the Gilder Lehrman Lincoln Prize in 2015. Holzer served for six years as Chairman of The Lincoln Bicentennial Foundation. For the previous 10 years he co-chaired the U.S. Abraham Lincoln Bicentennial Commission, appointed by President Clinton. President Bush awarded him the National Humanities Medal in 2008. Holzer is founding vice chairman of the Lincoln Forum, which has met annually in Gettysburg for 21 years.

The story of the 1863 dedication of Soldiers’ National Cemetery is one that is closely woven into the College’s history, as it was an alum of the Class of 1851 who oversaw the construction of the cemetery and invited Lincoln to give “a few appropriate remarks.” David Wills even hosted the President in his home the night before the ceremony.

Both Wills and Lincoln were met outside of the home by students, faculty, and staff of the College the next morning, who walked together to the ceremony. Today, first-year students recreate this walk in an annual tradition called the First-Year Walk.

The Lincoln Fellowship of Pennsylvania has sponsored the annual Dedication Day ceremony since 1938, and has been joined in the intervening years by the Gettysburg National Military Park, the Gettysburg Foundation, and Gettysburg College.

The anniversary of the Gettysburg Address and the Dedication of the Soldiers' National Cemetery was formally designated as Dedication Day, by a joint resolution of the U.S. Senate and House of Representatives, on November 19, 1946. Over the years, many influential and noteworthy national figures including: Harry Truman, Dwight Eisenhower, Tom Ridge, John Hope Franklin, Shelby Foote, Carl Sandburg, Doris Kearns Goodwin, Stephan Lang, Sandra Day O’Connor, Ken Burns, Stephen Spielberg and others have spoken at the ceremony.

This event is free and open to the public. A limited number of seats will be available. Parking for the event is provided at the Gettysburg National Military Park Museum and Visitor Center in Lot #3 off of the Baltimore Pike, with free shuttle service on the Gold Line Shuttle to the cemetery. 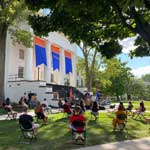