Noa Leibson will graduate in 2020 with majors in anthropology and art history, but she’s already a working artist: she sells commission-based oil paintings on her website and prints of her other non-commissioned work on Society6. Visit her website and you’ll see elegant, expressive portraits and animals brought to life in thoughtful brushstrokes—Leibson is one of the current captains of Gettysburg’s equestrian team, so that subject is a natural fit—but her art’s preferred subject matter goes way beyond sports and into another century. 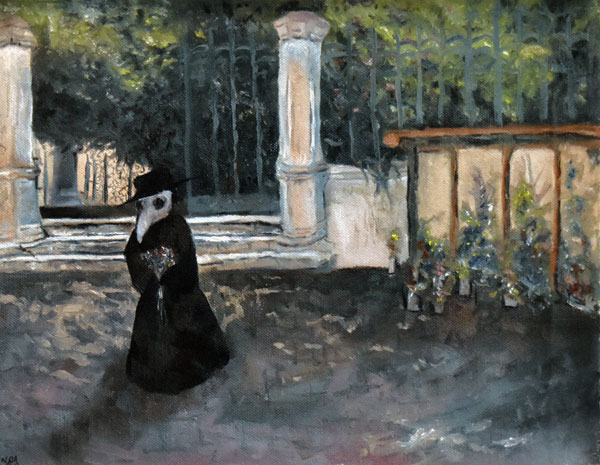 Leibson started painting plague doctors—medical physicians of the bubonic plague era that wore beak-like masks, robes, and ornate canes—when she was studying abroad in France. “It was just such a look!” Leibson exclaimed. Now, those prints sell like hot cakes on Society6, on everything from phone cases to soap dispensers.

“The site lets me put my prints on bath mats, among other things, and now all these people suddenly have plague doctor bath mats, so good for them...I guess!” she laughed. Beyond this curious enterprise, for Leibson, Gettysburg’s study abroad program was a life-changing experience. It allowed her to simultaneously explore another culture while making art inspired by it.

“I’ve always sought out adventures and Gettysburg has definitely cultivated that for me, especially with the study abroad program,” Leibson said. She made the decision to go to France in her sophomore year—partly because she comes from a family of francophiles (her grandfather was stationed there in World War II). But mostly, she chose France because the Institute for American Universities’ (IAU) Aix-en-Provence program allowed her to take fine art courses that would let her hone her craft in a studio setting.

While Leibson has been painting and riding horses ever since she was a grade-school-age kid, her time in France deepened her love for those interests in inspiring, perhaps challenging, new settings. While she spoke decent French already, it was still scary for Leibson to join a local riding club and train while she was there—a feat most non-native speakers would probably buck at, pun intended. “Textbooks don't prepare you for horse sport vocabulary. So I was a little lost at times,” she explained. But she’d take the bus to practice with her French peers every weekend, and eventually, they asked her to compete in a competition in which she represented the United States.

Even though Leibson felt a bit in over her head at times, being immersed in the equestrian and art worlds while in France was, in her words “just completely awesome.” She was riding horses every weekend and working on drawing and painting in the studio every weekday, sometimes even taking a bus with her class to paint a breathtaking landscape. “They have this famous mountain where I was studying, Mont Sainte-Victoire, which was the subject of a lot of paintings by several famous painters,” Leibson said. “So it was just incredible to be able to go there, see it, and do it myself.”

That thrill Leibson gets from going to the site of a major cultural happening seems to be part of what drives her interest in studying anthropology and art history. Outside of her Gettysburg studies, she completed a summer dig in Romania—she was encouraged to get field experience during the summer after her freshman year by her advisor, Prof. Ben Luley. As part of the anthropology curriculum, Leibson’s enjoyed the Archeology of Pennsylvania course, led by Luley, in which half the time is spent completing fieldwork.

“We would dig through a very significant site in Gettysburg itself—it’s a significant historical location and to actually be a part of uncovering that history was just incredible,” Leibson explained. The particular focus of Gettysburg’s program has been especially interesting in the way it focuses on archeology’s place in historical and personal narratives. “In anthropology at Gettysburg, there is an emphasis on unheard voices,” Leibson said. “People who have been suppressed—it’s being able to give them a chance to tell their story, for which I think archeology is helpful because [the uncovered stories are] not necessarily written by the winner.” 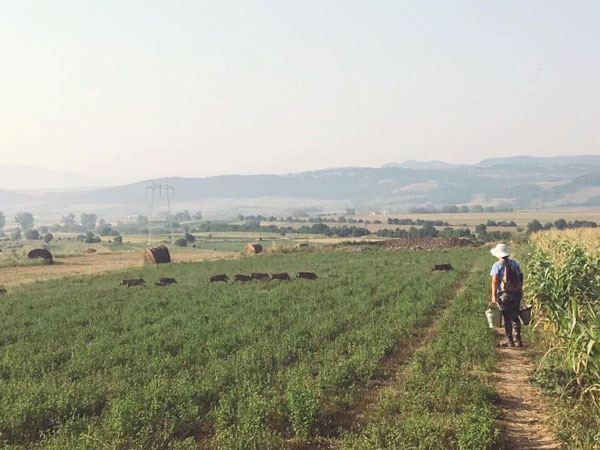 As a double major in art history and anthropology, Leibson finds she’s most at peace when her majors feel like they’re working in synchronicity—something she often experiences when she’s researching or writing for one class or another. Leibson’s multidisciplinary interests are satisfied in looking at all the different fields in anthropology—cultural, biological, linguistic, archeological—and every part of looking at human cultures, in the present, and in the past “at the people that are no longer with us and what they've left behind.” This, of course, informs her art history studies, in which Leibson said she’s able “to see what cultures had created, how these are found, the greater context of these artifacts, on these little pieces of human history.”

As a senior, Leibson looks forward to being the captain of the equestrian team, working on her capstone theses in anthropology and art history, and writing and painting even more. During her junior year, she won an extracurricular short fiction story contest—all while continuing to study and clear off her desk and paint in her spare time. This summer, Leibson will be the manager of the Horsemen's Association of Mackinac Island—a small island off the coast of Michigan that’s banned all cars and related vehicles. She heard about it at some point in her studies, decided she had to work there, and called around to businesses on the island until she had a job—that’s how she operates.

It seems there’s nothing Leibson is too scared to try—and she encourages other students to dip their toes into whatever interests they have at Gettysburg, especially if it has to do with a horse. “We have a roster spot for a beginner who competes in just walking and trotting, all the way up to roster spots that are for the highest jumping level,” Leibson explained. “So someone who comes to college and just has always wanted to do this, but never had the chance—they too can have the opportunity to compete and represent Gettysburg.” In the spirit of Leibson, why not try?

Learn more about our academic programs.