Sitting at the head of a long (and full) boardroom table, Will Essigs ’17 and Mariam Aghayan ’17 present an update about the research they have been completing this year. Around that table are members of the advisory board for The Eisenhower Institute at Gettysburg College—including former ambassadors, state and federal officials, and judges—but both students exude an air of confidence and poise. Aghayan answers a question about what non-governmental organizations they had met with, and the former U.S. Ambassador to Estonia nods with recognition.

They seem well practiced at this kind of public speaking and show of leadership because, well, they are. Just the week before this presentation, they presented their research to officials at the U.S. Embassy in Hungary.

"We struggle with these questions every day. By identifying successful initiatives undertaken in other countries, the team gave us useful ideas that we plan to pursue in our programming.” —Greg Meier, Foreign Service Officer

These presentations are part of two projects that were awarded by the United States State Department to Harold G. Evans Chair of Eisenhower Leadership Studies Shirley Anne Warshaw and students from two programs of the Eisenhower Institute at Gettysburg College—the Undergraduate Fellows and Fielding Fellows (of which Aghayan and Essigs are a part). Gettysburg is the only private, four-year liberal arts College to be named a partner institution of the Diplomacy Lab initiative, whose goal it is to broaden the Department’s research in response to global challenges.

The two projects are focused on: 1. Health care records management and migration in the Eastern Mediterranean; and 2. Foreign anti-corruption policy. After spending the year conducting research, attending meetings, and traveling to collect as much data and information as possible to inform their work, the Fellows will present their research and findings to the State Department this spring. In addition to the contributions the Fellows will make through their findings, they are also taking much away from the experience—how to conduct research and present recommendations that can produce tangible results.

Aligning with one of the Institute’s themes of study this year—refugee resettlement in the United States—the State Department tasked the Undergraduate Fellows with researching how governments in different countries approach the collection of health records from migrants and refugees, and specifically how these policies impact the current crisis in the Eastern Mediterranean region. Throughout the year, the Undergraduate Fellows hosted a series of panel discussions about the refugee crisis on campus, bringing together experts from a variety of backgrounds, organizations, and perspectives. They also met with federal, state, and private officials, hosting meetings in cities from Washington D.C. and New York City (at the United Nations Headquarters) to Lancaster, PA, where they spoke directly with Syrian refugees. To achieve a global perspective, they traveled to Dublin, Ireland, to attend workshops hosted by the Irish Refugee Council, and met with administrators and faculty at Trinity College, to learn how colleges have been approaching their research.

“My experiences this year have helped solidify my interest in policy work,” said Katerina Krohn ’17, a Political Science and Environmental Studies double major who worked on the project. “I hope that the results our project will be able to help guide the State Department as they make decisions regarding refugee health records.” 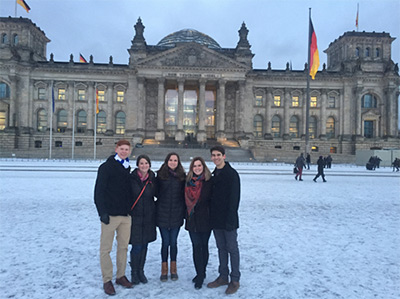 Over winter break, the Fielding Fellows traveled to Berlin, Germany, and Budapest, Hungary, to learn the challenges around corruption facing the European Union. In Berlin, they met with leaders from Transparency International, the leading non-governmental organization on worldwide corruption of public officials. After hearing from the former head of the organization for Hungary, the Fellows developed some new ideas for the presentation they had planned to share the next day with U.S. Embassy staff in Hungary.

“[After the meeting], they went back to their hotel in Berlin and stayed up until midnight refining and refocusing their presentation,” said Warshaw. “We hoped that would happen—that we would travel there and get a better sense of how to approach the research.”

"We are extremely impressed with the Gettysburg College Diplomacy Lab team," said Greg Meier, Foreign Service Officer at the State Department. "During their January visit to Embassy Budapest, they presented a well-researched thesis on the causes and potential solutions of the entrenched problem of corruption. We struggle with these questions every day. By identifying successful initiatives undertaken in other countries, the team gave us useful ideas that we plan to pursue in our programming.”

Will Essigs ’17, who previously conducted research on corruption through opportunities abroad, helped lead the project. “I took an unofficial leadership role on the project after studying a similar topic through an International Bridge Course grant,” he said. “I quickly learned that the most important function for an individual in this role is to empower the people around them and help provide tools for success. At our meeting in January, it was exciting to see the Embassy’s satisfaction with our work, but it most rewarding to see how invested our team had become in the project.”

The Fellows are still polishing their takeaways—so stay tuned for the findings—but Warshaw said their work provides a fresh perspective on the two projects.

“They do a tremendous amount of literature research and talk with experts—which brings the issues to life,” she said.

“This program is a wonderful opportunity to engage college students and to give them a window into the work of the State Department,” said Emily Royse Green, Foreign Service Officer, who has been speaking, Skyping, and working with the Fellows throughout the course of the project.

“The students participating in the Diplomacy Lab were given a real world research question to explore. We have had several videoconferences with the students about their research throughout the course of the project, and we look forward to reading the final project when they submit it.”