While distance can be an obstacle, it does not need to be a barrier. Many have experienced this firsthand throughout the COVID-19 pandemic as the circumstances prompted a pivot to remote approaches, but it’s not a new concept for economics Prof. Rimvydas Baltaduonis, who moved to the United States from Lithuania in 2001.

In October, during Lithuania’s 2020 election, citizens living abroad cast their ballots for a member of parliament in the newly-designated seat representing the Lithuanian diaspora—a historic first for the country. Further advancing the voting sphere, Baltaduonis formed a task force called “LTiVote” to advocate for internet voting for Lithuanian citizens living abroad—a topic that has been long debated in Lithuania. On June 30, he succeeded in this initiative, as the law was passed by the Lithuanian parliament and signed by the president.

“Politicians were estimating that there was a 10 percent chance they would pass it. People were saying ‘No way, elections are too close. We won’t be able to do that.’ But, we didn’t let the odds stop us. We said, ‘Well, let’s give it a try.’ And it passed,” Baltaduonis said. “We were very excited that it worked out in our favor.”

While internet voting was not implemented for this year’s election due to the demands of agency coordination and procurement delays, the legislation has paved the path for future elections.

“One of the reasons people were against voting online, especially in Lithuania, is cybersecurity. There was concern that the next-door neighbor Russia would meddle in elections, especially after Russia interfered with the U.S. 2016 presidential election. After that, many countries kind of took a step back when it came to e-voting or i-voting,” he said. “But, the reality of COVID-19 brought forth a new point to the debate—that beyond cybersecurity, there is physical security that we need to care about. If we have people going to the polls, we’re asking them to decide whether or not they want to risk getting themselves or their family sick.”

While internet voting is new for Lithuania, the country follows the lead of Canada, Estonia, France, and Switzerland, which have all either used internet voting in the past or currently do. It has adopted France’s model of internet voting, which allows citizens abroad to vote in a hybrid way—using a uniquely-generated code that is mailed to the voters abroad, who then use it to identify themselves, and cast their vote online.

Baltaduonis is confident that this is at least as safe and secure of a voting method as the currently used mail-in voting.

“Lithuania is ranked as No. 4 in the world in terms of its capability to respond to cyber threats. It even leads a European Cyber Rapid Response Force,” Baltaduonis said. “To put it in perspective, the United States and the United Kingdom are No.1 and No. 2, then France, Lithuania, and Estonia. Two countries among those five have internet voting, and Lithuania is just as prepared and ready to respond as they are.”

Even though the U.S. is often placed at the top of the pack for cybersecurity, online voting is an idea that has yet to be considered at the federal level. Baltaduonis contributes this to the country’s lack of digital governance. He thinks that the COVID-19 pandemic and other countries’ subsequent decisions to explore digital voting methods, like Lithuania, should be a wake-up call for the U.S.

“The pandemic is not the only thing that can disrupt voting. It could be natural disasters or migration waves that happen because of some accident or act of war,” he said. “We need to continue to elect democratic governments so that we can continue having our rights and freedoms protected and prevent authoritarian or totalitarian regimes from taking over when you have these unusual circumstances. Digital governance is one way to do that.”

Beyond his hopes of U.S. leadership opening their minds to the possibilities that exist in digital governance, Baltaduonis also hopes that the changes he has made and continues to make in his home country inspires his students to be global citizens who overcome obstacles and barriers to make a difference.

“Being a faculty member here at Gettysburg, beyond teaching, I can also be a global citizen and engage on issues and questions that are important for my heritage and for my upbringing. And at the same time, use that experience to inform my students,” said Baltaduonis, who is an affiliate of the international affairs and global studies program at the College. “This is just a perfect example of how, being at Gettysburg, you can change what is happening in Lithuania or elsewhere across the world in very meaningful ways. In this day and age, especially with internet enabled technologies, we can do that. The borders—the oceans—they do not matter anymore, or at least they do not have to.”

Learn about how the Center for Global Education and our international affairs and global studies program at Gettysburg College encourages all members of our academic community to become citizens of the world.

By Molly Foster Photos
by Miranda Harple and courtesy of Rimvydas Baltaduonis
Posted: 11/02/20 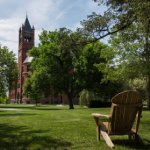