When 2020 Newman Civic Fellow Maggie Galloway ’22 looks at the world, she sees its interconnectedness and how each action is followed by a reaction. Small tensions can give way to larger struggles, but small efforts can also ignite large-scale change.

The Newman Civic Fellowship recognizes and supports community-committed students like Galloway who are changemakers and public problem-solvers at Campus Compact member institutions. For Galloway, her passion for change began in the pattern of disparity and inequality she observed in her hometown.

“Growing up near Baltimore, Maryland, I frequently witnessed harmful bias present in many locals’ rhetoric. Contrary to that behavior, I knew that simply because one person has immense security does not mean another should be denied it,” she said. “This mindset, and a passion for many social issues, grew within me over time, as I witnessed events such as the Freddie Gray protests in Baltimore and later on learned about the impacts of climate change.”

Beyond her interest in environmentalism and understanding the disparities between social and ethnic groups, Galloway is also passionate about immigration and refugee rights, the humanitarian issues revolving around the Israeli-Palestine conflict, and many other issues—all of which she’s been able to further explore at Gettysburg College.

“The strength of the community, the desire to help each individual student, and the wide array of extracurriculars available to expand my knowledge of the topics I’m passionate about, all set Gettysburg College far beyond any other college I looked at,” said Galloway, an anthropology major who will be declaring an international affairs double major in the fall.

In her first two years at Gettysburg, Galloway has found many ways to inspire change. She has volunteered with the Center for Public Service and participated in several Eisenhower Institute programs, including Contours of the Middle East, which inspired her to add international affairs as her second major. She also joined service organizations Alpha Phi Omega and Amnesty International.

Alongside fellow Amnesty International members, the Gettysburg Environmental Concerns Organization, and the Peace and Justice Studies Student Council, Galloway circulated a petition on campus in the fall that focused on the momentum created by environmental activist Greta Thunberg. The petition received hundreds of signatures.

“By the end of it, I was exhausted. The process was long and arduous, but with the support of many other people, we were able to make small changes in the habits of our College community,” she said.

The Newman Civic Fellowship will not only connect Galloway to a national network of student leaders, but it will also provide her with additional training and resources so that she may continue developing her passions and strategies for social change on campus and beyond, an opportunity for which she’s incredibly grateful.

“The main goal, for any change, is to start small. With small habits and steps, you can build to greater heights and depths than you ever thought imaginable,” Galloway said. “It all starts with a few passionate people that are willing to work together.” 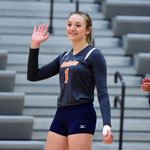