With his head often buried in a book, Brandon Neely ’23, grew up fascinated by stories about people that left an indelible mark on a place. Driven by this inherent curiosity, he has dedicated his Gettysburg College education to studying history, orienting himself in geographical places of significance and learning constantly about the world around him.

Neely chased his fascination for history by spending this past fall semester abroad in Egypt, studying at the American University in Cairo. He arrived on the scene as a self-assured, eager Gettysburg College junior—a history major with minors in Civil War Era Studies and public history—and left with connections, lifelong friends from around the globe, and a new mindset about both the world and himself.

“[After going abroad,] your worldview becomes larger. You’re aware of so much more, but the world itself feels so much smaller and more accessible,” Neely said. “Coming back to the [United States] feels easier and more doable, and the skills that you learn abroad allow you to experience the [U.S.] in a more exciting way.”

However, when Neely first arrived in Cairo, he almost turned around and went back home. After the plane touched down in Egypt, he felt the hot desert sun and suddenly felt parched. He had no water, no money, and no way to communicate with the locals in Arabic about how to find his apartment.

“I was miserable, dehydrated, and I was saying, ‘I’ve got to go home—I bit off more than I can chew,’” Neely recalled.

He was ready to admit defeat and fly back to Gettysburg for the semester, but when he found his room, cleaned up, and had a drink of water, he decided to turn this challenge into an opportunity for drastic change. By the end of the trip, he spoke Arabic, learned how to navigate the local shops, and he had traveled from the Mediterranean in the northernmost area of Egypt to the border of Sudan in the south.

“I went from that position [on my first day] to my last few days in Egypt speaking almost entirely in Arabic all day, buying groceries, buying gifts, [and] handling logistics,” he said. “There’s a sense of pride that I did this—I made it [and] I powered through.”

While abroad, Neely learned that the most gratifying aspect of being in a part of the world steeped in rich history, not unlike Gettysburg’s campus, was the intersection of exploring the sites and history through his travels, alongside the lessons in the classroom.

“I took a ton of Islamic and ancient history while I was there,” he said. “We would learn about something in the classroom, and it was good, but the real value was going out and walking where that king had walked or staring into the eyes of that mummy or touching the wall that was built in the 1300’s Conquest Egypt.”

Neely also took a violence, war, and conflict class in modern Africa, during which he wrote a 25-page research paper on women in the Algerian War. Much of the research he conducted for this project was in real-time—speaking with Algerian friends he made—and this past April, he even got to present that research at a conference in Cairo, via Zoom.

In Egypt, Neely discovered that a new learning experience could truly be found around every corner, and he fully took advantage of it.

Whenever anyone asks Neely about his trip to Egypt, it’s these hands-on, exploratory moments that he fondly references—and he has videos to preserve them. He wanted to share highlights from his travels with his family back home in Ozark, Missouri. And rather than postcards, which were not abundantly available in Egypt, he vlogged (video blogged) 29 digital postcards and uploaded them on YouTube, everywhere from the Great Pyramids to Mount Sinai, Pompeys Pillar, the Karnak Temple Complex, and well beyond. 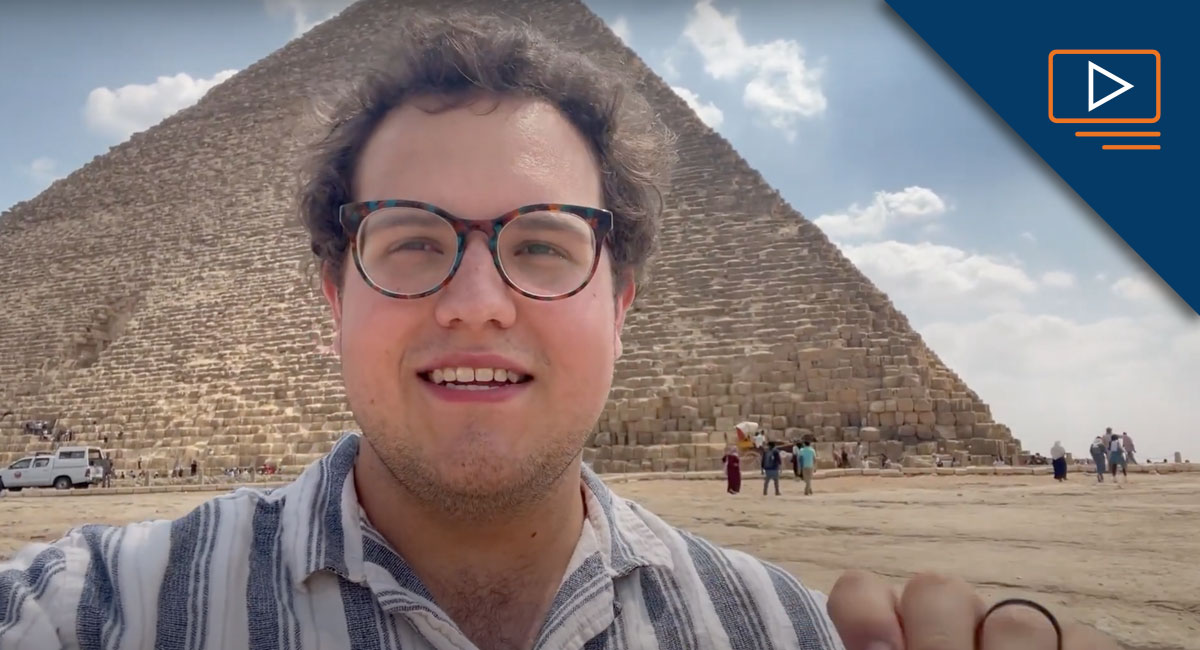 “It has already been fun to go back and relive these moments,” said Neely, who returned from his time abroad in February. “The last ‘postcard’ that I made, I made on the day I was flying out, and I knew that I would be too emotional to say goodbye to my friends without breaking down. So, it’s my thank you note to all the people there.”

The awe-inspiring historical locations that stepped off the pages of textbooks, the people who shared a wealth of knowledge and became fast friends, a strengthened curiosity for the world—this and much more is what Neely has carried with him from Egypt back to Gettysburg. Now, as he looks onward at his quickly approaching senior year and his subsequent career trajectory, he’s able to do so with fresh eyes.

“[Studying abroad] helped me understand a little bit more about my academic and professional goals,” Neely said, further explaining that it challenged him to break out of the confines of routine—to explore different perspectives and potential paths. “It forced me to try different things and to engage with the same types of work differently, So, it’s still history. It’s still thinking about documents and people in stories, but I'm telling those stories differently. I’m seeing them differently.”

Neely now sees a future in either archival science, working at a museum or a library similar to Musselman Library’s Special Collections and College Archives, or potentially even digital history and documentary filmmaking—rooted in the stories and people that that shape history, an ongoing, lifelong interest of his.

“I think really what it comes down to is [that] history provides a story of people,” Neely said. “And that love of people, as I learned in Egypt, is what makes history connect so much with me.”

Learn about how the Center for Global Education challenges students to make the world their classroom.