Jerry Spinelli ’63 will speak on Sunday, May 19, 2019, at Gettysburg College’s 184th Commencement ceremony.

The 11 a.m. ceremony will take place—rain or shine—on Beachem Portico on the north side of Pennsylvania Hall.

Daisy Sullivan ’19 recommended Spinelli’s name as speaker after rereading her favorite book, Crash, by the author this summer: “The book has such a strong message that I believe is important for people of all ages to hear,” she said. “I’m so excited to learn that he will be our speaker because our generation grew up reading his books. They reflect a type of wisdom that my peers and I could really benefit from as we gear up to enter the ‘real world.’”

One day in second grade Jerry Spinelli dressed up in his cowboy outfit, complete with golden cap pistols and spurs on his boots. He went to school that way. It was not Halloween. When the teacher asked if he "would like to do something for the class," he got up and sang "I Have the Spurs that Jingle Jangle Jingle."

Shortly thereafter he ceased to be a singing cowboy and decided to become a baseball player. In eleventh grade he wrote a poem about a high school football game. It was published in the local (Norristown, PA) newspaper. He traded in his baseball bat for a pencil and became a writer.

The story of his life to that point is told in his memoir Knots in My Yo-Yo String. His sixth novel, Maniac Magee, was awarded the Newbery Medal in 1991 for "The Most Distinguished Contribution to American Literature for Children." His eighteenth book, Wringer, received a Newbery Honor. Stargirl will be a Disney film on the company's new streaming platform, expected to launch in late 2019.

Jerry Spinelli's books appear in more than 40 languages. Anti-apartheid forces in South Africa recruited Maniac Magee to their cause. Loser travels through rural Japan as a stage play. There are Stargirl Societies around the world.

Jerry Spinelli lives with his wife and fellow author, Eileen, in Media, Pennsylvania. They have six children and thirty-six grand- and great-grandchildren. And counting.

He received an honorary degree from Gettysburg College in 2005. 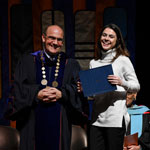