One of the wrestling team’s top competitors throughout his collegiate career, senior Sean Thompson ’21 let his actions do most of his talking early in his career. But with the help of an internship through Gettysburg College’s Civil War Institute, Thompson has emerged as a vocal and consummate team leader.

Thompson opened his collegiate wrestling career with a bang, claiming top honors at 141 pounds at the Messiah Invitational in his first-ever appearance. He’s racked up 82 career wins in three seasons, including 31 during the 2019-20 campaign.

Off the mat, the history and political science double major has grown his leadership skills exponentially, thanks in large part to the Brian C. Pohanka Internship Program. The program gives Gettysburg students a special opportunity to do paid work on the frontlines of history, giving public tours of iconic historic sites, gaining hands-on experience with original artifacts and documents, assisting with the management of historic landscapes, leading children’s programs, and conducting independent historical research. At the urging of Gettysburg History and Civil War Era Studies Prof. Peter Carmichael and History Prof. Bill Bowman, Thompson applied for the program during the fall of 2018.

“It sounded interesting to me because I wanted to improve my public speaking skills for wrestling so I could take a leadership position on the team,” said Thompson. “You get to meet so many people and learn so much about history, but there’s a lot more to the National Park Service than just being a tour guide, which is essentially what people think.”

Thompson was tested early with an interview in front of 10 park rangers hailing from sites like Gettysburg, Richmond, and Harpers Ferry. He powered through the process and after months of anxious waiting, received news he was accepted into the program in January 2019. As part of the internship, Thompson would receive a $1,500 stipend and on-site housing.

In May 2019, the native of Plainsboro, N.J., headed to Virginia where he was housed at Fort Harrison alongside another Gettysburg student. The Bullets wrestler was assigned to work part of the Richmond National Battlefield Park, specifically at the Tredegar Iron Works Museum and the Cold Harbor National Battlefield Park. He worked five days per week from 9 a.m. to 5 p.m.

Thompson’s public speaking was put on display as a historical interpreter. He oversaw tours around the sites and explained the historical significance of those venues to eager families.

“You want to provide a great experience so people care about these sites and why they should be preserved and makes them want to come back and learn more and help the Park Service,” Thompson stated. “It made me have more appreciation for the history that we have here at Gettysburg and why it should be preserved as well.”

One of Thompson’s projects was demonstrating how to load a cannon at Tredegar Iron Works. He would ask for volunteers from tours to help load the 1,000-pound implement, a job typically handled by seven soldiers in the heat of battle.

“When I did the tours for the families that came in, I would always ask for volunteers. So many children came up and lots of parents got involved, too. They had such a blast and they learned so much more. Many families were appreciative, and I received many compliments. That was one of my greatest pleasures of working here; to give people knowledge and get them to come back to the parks.”

As part of his experience, Thompson also took part in live reenactments on the Richmond Battlefield. He donned the garb of the 5th New York Volunteer Infantry, also known as “Duryee’s Zouves,” one of the more unique Union regiments because of its attire featuring extremely baggy red pantaloons, a dark blue Zouave jacket with red trim, a red Zouave sash with sky blue trim, and a red fez with a yellow tassel. Thompson would march alongside other reenactors as part of anniversary events. 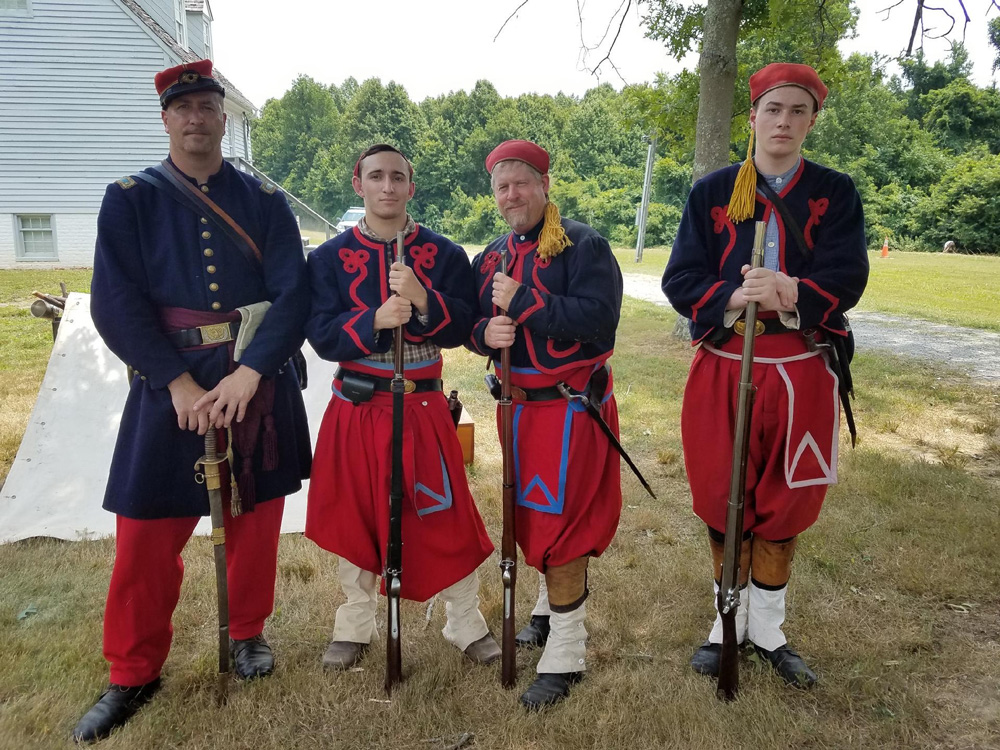 As part of his internship, Thompson joined reenactments on the Richmond Battlefield, dressing up as a member of the 5th New York Volunteer Infantry.

When Thompson wasn’t giving tours, loading cannons, or marching on the battlefield, he was checking out another aspect of the park service and indulging his interest in law enforcement by riding along with park officers. Park officers protect the historical sites from vandalism and on occasion, respond to reports of crime in Richmond. For his protection, Thompson donned body armor during the ride-alongs.

“The national park has different professions such as being an interpreter, cultural resource manager, or working in the archives,” noted Thompson, whose future career aspirations include working counterintelligence for the FBI or CIA. “On the law enforcement branch, the job is to protect and preserve battlefields and sites from vandalism and other crimes. It was a unique experience and it got me interested in something like that.”

Thompson kept up with wrestling workouts while in Virginia. With help from former Gettysburg coaches Andy Vogel and Pankil Chander and current interim head coach Gino Frank, he was connected with the Richmond Wrestling Club. He trained alongside high school and collegiate wrestlers and took advantage of summer workouts sent along by his coaches at Gettysburg. The added competition contributed to a strong junior season for Thompson.

“That was a great experience getting to wrestle with those guys. I think it really propelled me to success this past season. Hopefully some of them get interested in Gettysburg, and we pick up some more wrestlers from there.”

This year, Thompson’s hopes for a final hurrah on the mats have been waylaid by the COVID-19 pandemic. Competition was suspended for the fall semester and due to its high-contact risk, wrestling was limited to primarily strength and conditioning training. For his part as a team captain and one of the few upperclassmen remaining on campus, Thompson was active and engaged with his teammates on campus and off, helping first-year students adjust to their new surroundings and keeping in constant contact with the rest of the team. In addition to the leadership skills he learned through the Pohanka Internship, Thompson learned what it means to be a great team leader from some of his former teammates, such as Louie Carusillo ’18, Paul Triandafilou ’19, Colin Kowalski ’19, and Colin Devlin ’20.

“They were so helpful to the freshman class and that made us love this team,” recalled the current senior. “I felt more connected than I ever did in high school because there are such great guys on this team. You feel like you’re in a family with them.”

The fate of the wrestling season hangs in the balance as the Centennial Conference Presidents’ Council continues to deliberate and discuss options for the upcoming semester. For Thompson, he’ll remain invested in the wrestling program regardless of future decisions and he’ll continue to build on his growing leadership qualities that have led him through a tumultuous year.

“I know it is a stressful year, but I think all of us at Gettysburg have learned to adapt and take the initiative during this strange semester. I think we’ll all be set next semester and hopefully things get better. I think being a liberal arts college like Gettysburg offers so much and students shouldn’t be afraid to try anything. You never know where you’ll end up.”