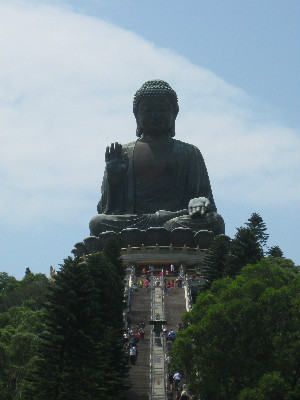 The clearest explanation of Buddhism begins with the life of its founder, Siddhartha Gautama, who was born sometime in the fifth century BCE in the foothills of the Himalayas, in what is now Nepal.

While we refer to Gautama as the Buddha, the word Buddha actually means “awakened one,” thus, Gautama was not born with this title, but achieved it over the course of his lifetime.

In Buddhism, the Buddha is not seen as a divine being—at least not entirely. The Buddha is typically seen by Buddhists as an awakened human being who saw through to the reality of existence and taught others how to escape the suffering in this life just as he did.

Becoming the Buddha: The Four Sights and the Great Renunciation

Gautama’s father wanted him to grow up to be a warrior, so from the moment of his son’s birth, he shielded Gautama from all that is ugly, tragic, or painful in life, surrounding him instead with beautiful women, rich foods, luxurious accommodations, and every sort of physical pleasure.

Satiated in this life of luxury, Gautama grew up, married, and had a son. But one day, while out on a chariot ride, he went beyond the boundaries that his father had marked off for him and encountered an old man. All signs of aging and decrepitude had been hidden from Gautama until now, so he was shocked and disturbed by what he saw. He asked his chariot driver what had caused the man’s miserable condition; the driver responded that old age is the fate of every person and that no one can escape it. This was the “fight sight,” and it threw Gautama into a deep melancholy.

On a subsequent rides, Gautama encountered a severely diseased man (the “second sight”) and a corpse (the “third sight”). On both occasions, Gautama was devastated by the reality of suffering and death. Finally, on his fourth and final chariot ride, Gautama saw a religious hermit practicing meditation (the “fourth sight”). When he asked his driver what the hermit was doing, the driver responded that the hermit had left the physical pleasures of the householder’s life to seek liberation from suffering and sorrow.

Buddhist tradition says that the four sights created an existential struggle for Gautama between his attachment to his family and his desire for spiritual liberation. Ultimately, Gautama realized that the superficial pleasures of the palace could never provide lasting happiness and peace, and he took leave of his family and set off on a spiritual journey known as “the Great Renunciation.”

After leaving home, Gautama studied with a series of religious teachers, but he soon realized that none of their practices could lead to enlightenment. He then began a program of severe physical austerity, joined by five other ascetics who were impressed with his discipline and drive. For several years, Gautama and his companions practiced together without result, until he realized that severe asceticism was not the way to enlightenment, either.

Realizing that his body was too weak to support any strenuous spiritual endeavor, Gautama accepted a meal from a village girl. Thus fortified, he resolved to sit under what came to be called the Bodhi Tree, the Tree of Awakening, until he attained enlightenment—which he did in the hours just before dawn. The Buddha then returned to his five companions, who became his first disciples and ultimately attained enlightenment through his teaching.

What Do Buddhists Believe?

While there are many important differences among Buddhists across time and space, the core of Buddhist belief can be found in the teachings of the Buddha’s first sermon, which have come to be known as the Four Noble Truths.

The First Noble Truth: The Truth of Suffering

In the First Noble Truth, the Buddha makes a dramatic, comprehensive statement about the fundamental nature of human life: life as it is normally lived is suffering, dukkha. Permanent happiness, says the Buddha, cannot be found by clinging to the physical and mental things of this world.

The Second Noble Truth: The Truth of the Origination of Suffering

The Second Noble Truth points to the root cause of this persistent suffering: desire. Here the Buddha teaches that the cause of our unhappiness and perpetual dissatisfaction is our craving or “thirst” for self-gratification.

The Third Noble Truth: The Truth of the Cessation of Suffering

The Third Noble Truth offers some hope: an end to such suffering is attainable. The Buddha teaches that the end of suffering—the realization of nirvana—is brought about by letting go of our craving or thirst for more.

The Fourth Noble Truth: The Truth of the Eightfold Path

The Fourth Noble Truth teaches that nirvana can be attained through the practice of the Eight-fold Path, the Buddha’s “prescription” to cure the disease of suffering. The eight elements are Right Understanding, Right Thoughts, Right Speech, Right Action, Right Livelihood, Right Effort, Right Mindfulness, and Right Concentration.

Given that Buddhism holds that realizing a new way of seeing reality is central to attaining enlightenment, one of the most important Buddhist practices is mindfulness. In his book, The Miracle of Mindfulness, Vietnamese Zen monk Thich Nhat Hahn describes mindfulness as “keeping one’s consciousness alive to the present reality.”

Meditation has been called “the heartbeat” of Buddhism. Meditation involves wisdom and compassion, the two central components of the path of enlightenment, and it is a primary means by which one shakes the hold of ignorance, greed, and anger. The ultimate goal of meditation is the realization of nirvana, but the practice itself is also an important component of the goal: changing one’s way of engaging the world and understanding both reality and oneself.