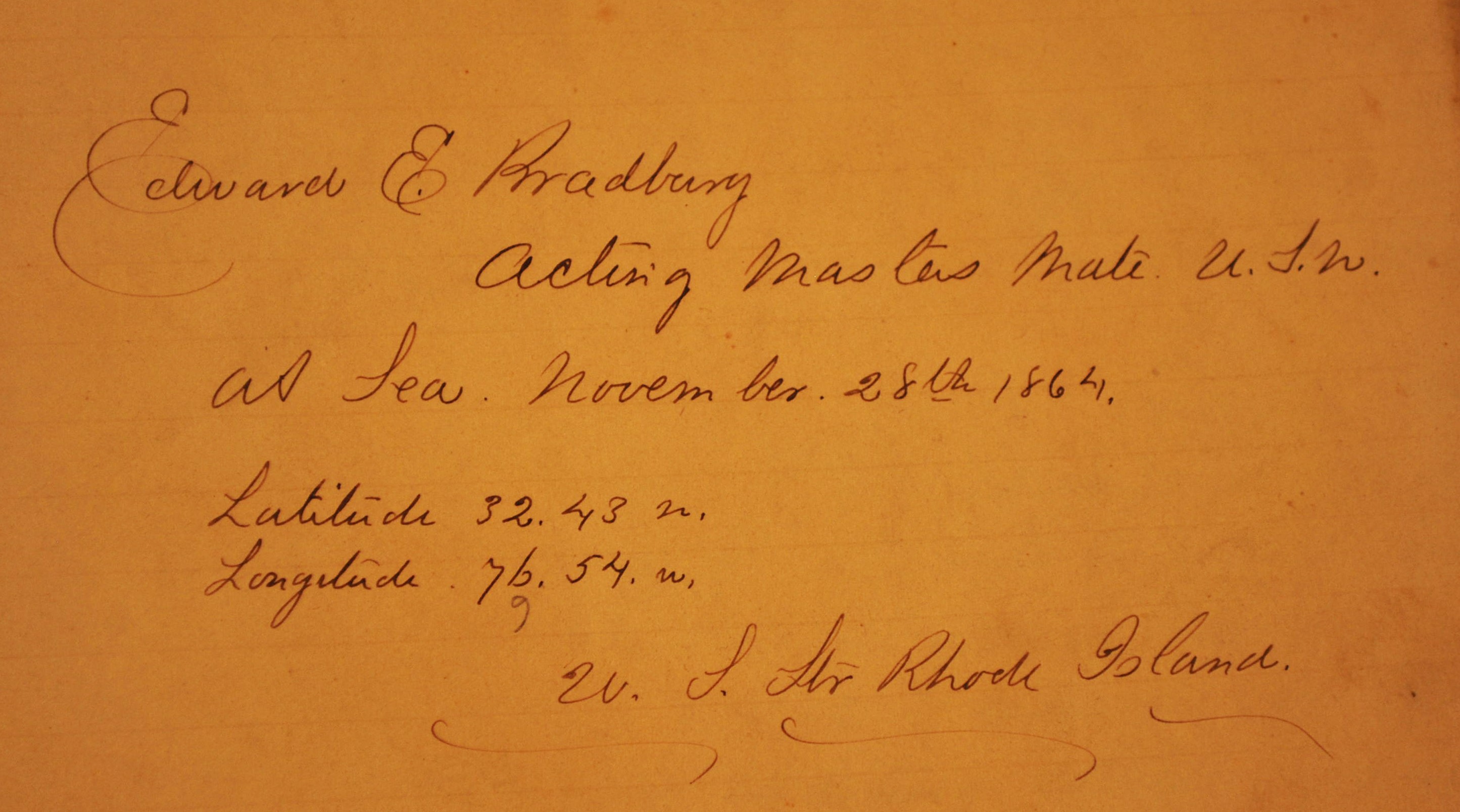 This collection was purchased from Kurt Gippert Bookseller in March 2019.

Edward Emerson Bradbury (1845-1909) was a U.S. Navy sailor from 1862-1909. Bradbury first served aboard the U.S.S. Kensington in February 1862 as a Yeoman and then a Paymaster’s Steward until August 1863. Bradbury then served on the U.S.S. Hendrick Hudson as a Paymaster’s Clerk until November 1863. In February 1864, Bradbury was appointed an Acting Master’s Mate aboard the U.S.S. Saco until May 1864. In August 1864, Bradbury, as Acting Master’s Mate, was assigned to the U.S.S. Rhode Island, on which he kept a daily log. On January 15, 1865, Bradbury was engaged in the Second Assault on Fort Fisher in North Carolina. In July 1865, Bradbury was accidentally shot in his right arm and admitted to the Pensacola Naval Hospital in Florida, where his arm was then amputated. Following the end of the American Civil War, Bradbury was listed as unfit for duty, but stayed in the Navy and was assigned to many different ships like the U.S.S. Vermont, U.S.S. Idaho, U.S.S. Vandalia, U.S.S. Speedwell, and the U.S.S. Sabine. On February 15, 1909, Edward Emerson Bradbury died from heart disease in Bradford, Mass. and is buried there.

A few major events come up in Bradbury’s journal/ledger, one of which is the death of Abraham Lincoln and 21-gun salute from surrounding ships is described after the fall of Richmond. The longest of the entries is two pages, and contains Bradbury’s experiences in the Second Assault on Fort Fisher. The ship, on which Bradbury served, the U.S.S. Rhode Island, was responsible for recovering the crew of the sunken ironclad U.S.S. Monitor in 1862. The ship was renamed the Charleston and sold for merchant service in October 1867.

This collection is a 50-page folio journal with the first entry on January 1, 1865 and the last entry on July 2, 1865. There are scattered math equations throughout the journal. The first four pages are instruction based about compass corrections, other navigational tasks, and deck work related to sails. In almost every entry, the day of the week is written, the time, the weather, the location of the ship Bradbury was aboard that day (mostly the U.S.S. Rhode Island), his duties for that day, leisure activities, and his personal health for that day (ex. good, fair, starving). On the inside of the back cover is a laundry list and an address for the laundress. The folio was entirely handwritten in script using both pen and pencil. The ink pen writing is dark and neat. The pencil writing is a little faint but also clear.