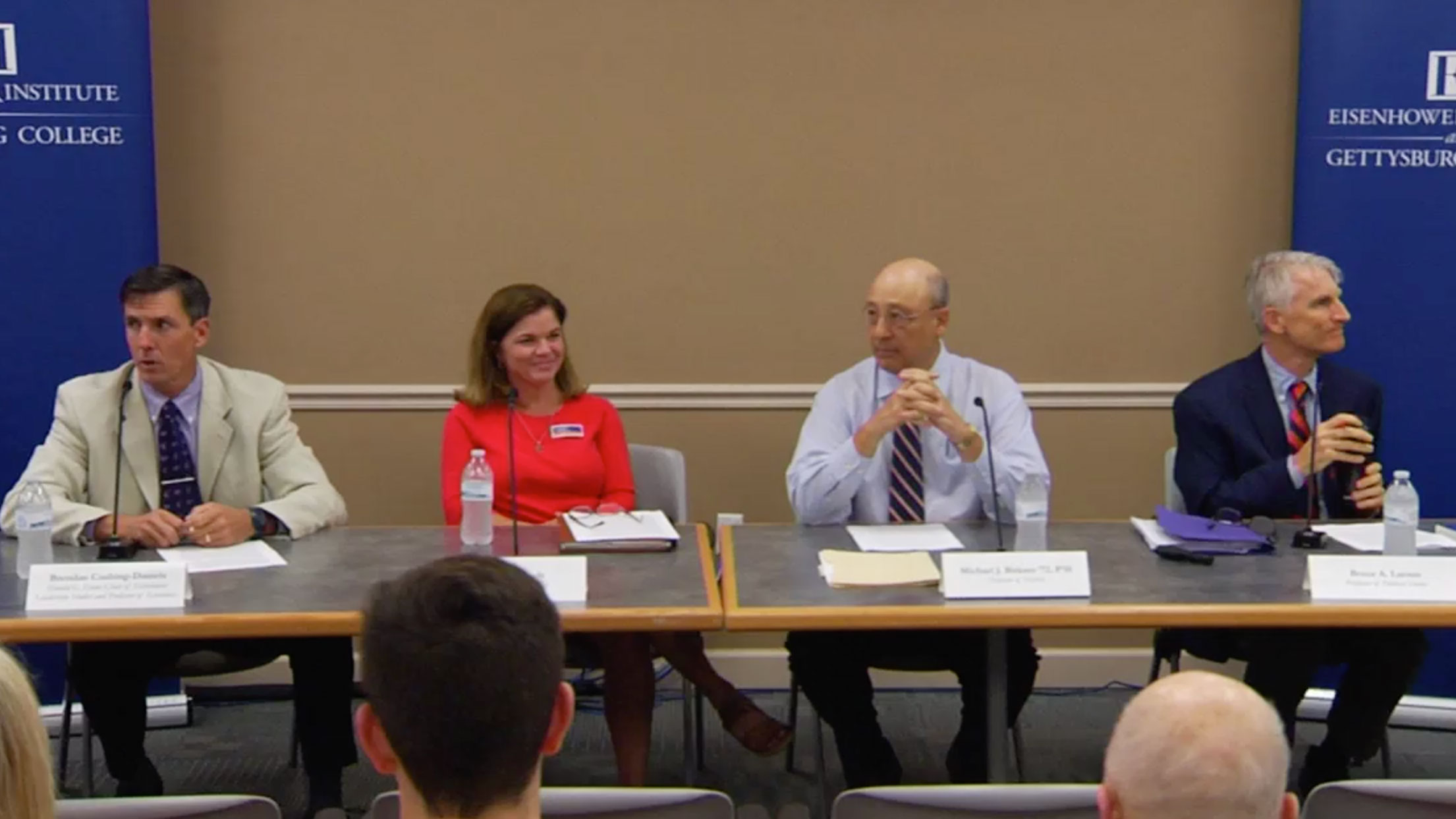 Consistently popular with American voters during his consequential two-term presidency (1953-1961), Dwight Eisenhower received little credit for his leadership from contemporary opinion shapers. Since the 1980s, scholars have rethought Eisenhower’s modus operandi as chief executive. In this presentation, we will discuss several examples of Eisenhower’s presidential leadership, including team building, negotiation, inclusiveness, and bridge building.

Moderator: Brendan Cushing-Daniels, Professor of Economics and Harold G. Evans Chair of Eisenhower Leadership Studies
Prof. Cushing-Daniels’s primary research area has been at the intersection of labor and public economics on issues of discrimination and social welfare programs. His current research is on price discrimination in monopoly markets and the impact of college major on cooperation in an experimental setting.

Bruce A. Larson, Professor of Political Science
Prof. Larson earned his PhD in political science from the University of Virginia. A specialist in American political institutions and processes, he teaches and conducts research on a variety of topics, including the U.S. Congress, political parties and elections, and the politics of public policy. Larson was a Fulbright Scholar at China Foreign Affairs University in Beijing during the fall 2013 semester.

Michael J. Birkner ’72, P’10, Professor of History
Prof. Birkner has taught at Gettysburg College since 1989, chairing the department from 1993 to 2003. Birkner is the author or editor of 14 books and many articles on 19th and 20th century American social and political history. He has written and lectured extensively on the Eisenhower presidency, and in 2018 led a Gilder-Lehrman seminar for secondary school teachers at American University, focused on the nation’s 34th president.

Anne S. Douds, Professor of Public Policy
Prof. Douds is a retired civil rights trial attorney and current policy consultant. She has litigated women’s rights cases and consulted on policy initiatives concerning women’s reproductive rights and access to justice. She is also the faculty lead for the Eisenhower Institute’s Women and Leadership program. 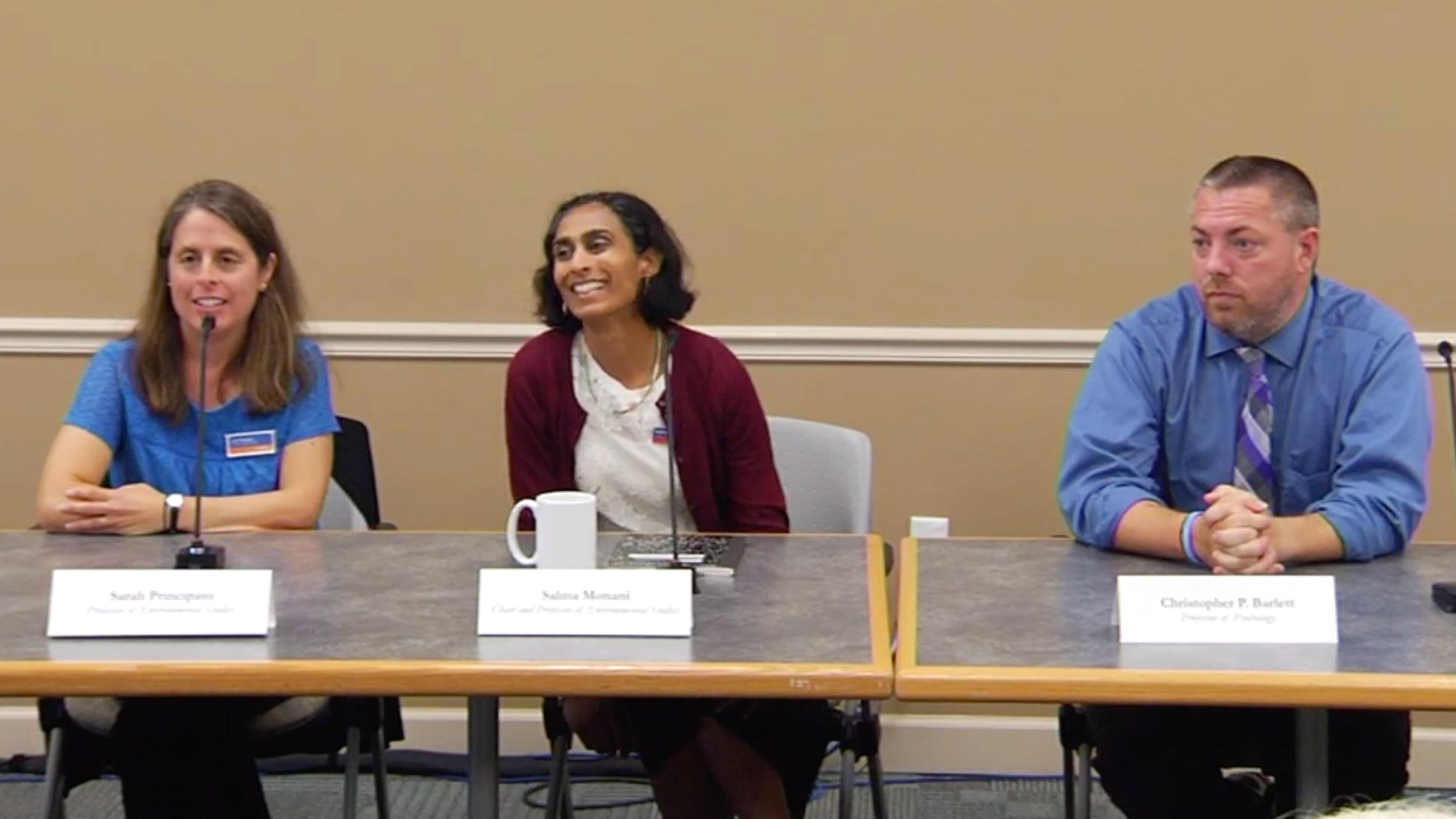 Climate change is a complex issue that requires multiple angles to understand. This panel will bring together the insights of a glacial geologist, an ecomedia scholar, and an experimental social psychologist to demonstrate different insights on the study of climate change. In the spirit of the liberal arts, these angles will be discussed while showcasing the College’s commitment to interdisciplinary work by highlighting research with students.

Moderator: Salma Monani, Professor and Chair of Environmental Studies
Prof. Monani is an environmental humanist with a research focus on ecomedia studies. In considering the role of media in environmental issues, she has worked and been published with students interested in climate change communication.

Christopher P. Barlett, Professor of Psychology
Prof. Barlett is trained as an experimental social psychologist focused on aggression. He has a productive research lab that examines the predictors and outcomes of aggressive behavior, such as cyberbullying, provocations, personality, and global temperature. His work involves many students as research assistants, who are involved in every phase of the research process.

Sarah Principato, Professor of Environmental Studies
Prof. Principato is a geologist with a research focus on glacial geology and records of climate change. She began studying glaciers in Iceland in 1997, and since 2003, several students have worked with her in the lab and field as research assistants.

Economics, Politics, and Citizenship in the Trump Years

Video: Economics, Politics, and Citizenship in the Trump Years 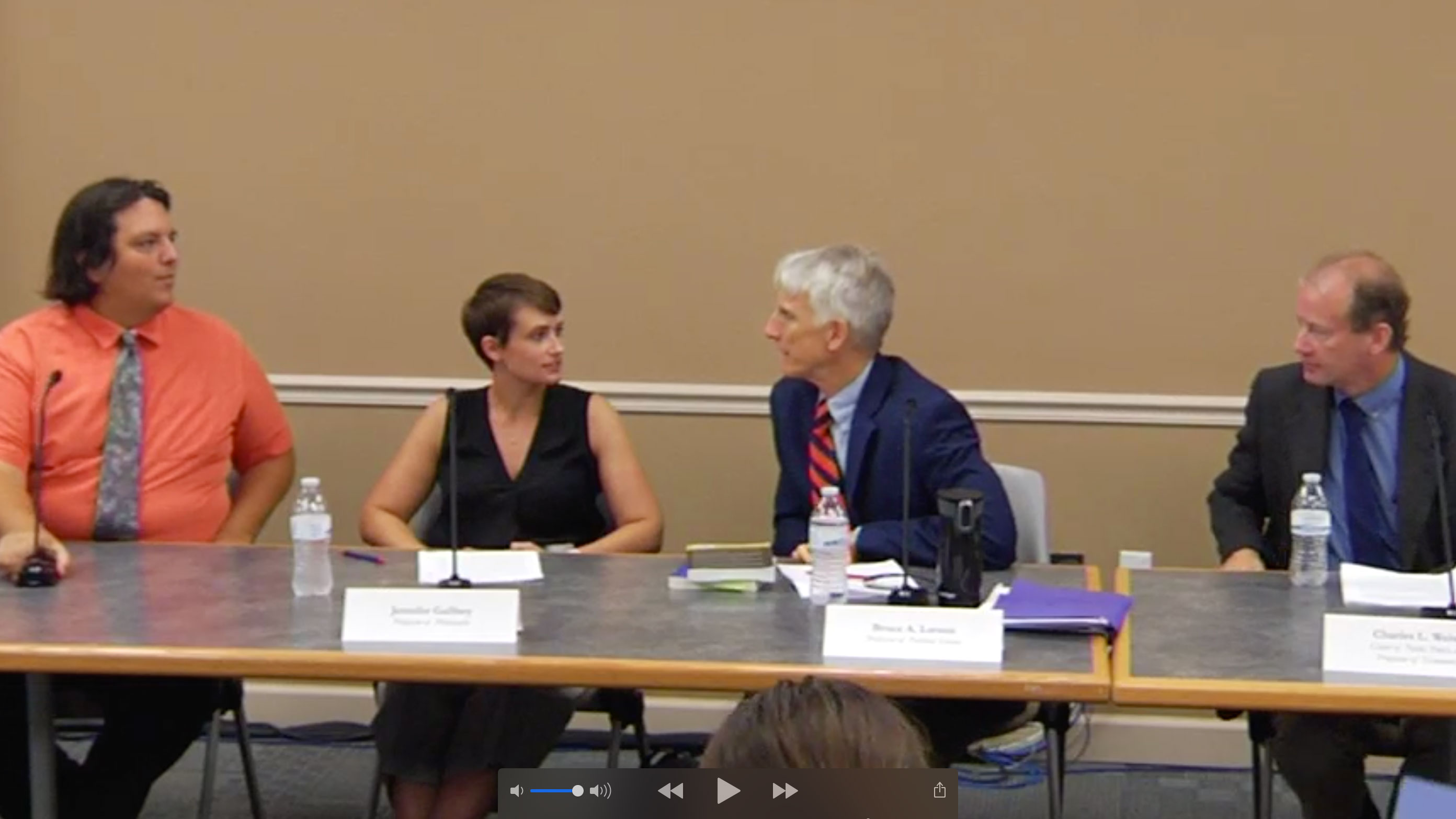 In recent years, the election of Donald Trump as president of the United States, Brexit in the United Kingdom, and the rise of right wing populist parties in Europe and elsewhere have delivered a shock to the global, political, and economic order. This panel will explore the ways in which the encroachment of capitalism on political practice and social life has set the stage—by hollowing out democracy—for the turbulent times that we find ourselves in now. Drawing lessons from similarly turbulent moments over the last century, this panel will consider from different disciplinary vantage points how a seemingly inexorable capitalist economic order has reshaped citizenship and democratic practice. In so doing, the panel will suggest several answers to the question of why western liberal democracies remain as vulnerable as ever before to nationalistic and populist politics.

Charles L. Weise, Professor of Economics and Chair of Public Policy
Prof. Weise earned his PhD in economics from the University of Wisconsin-Madison. His research involves various aspects of U.S. monetary and fiscal policy, including the political economy of monetary policy in the 1970s and beyond. He teaches courses in all areas of macroeconomics, and especially enjoys his courses on monetary policy and macroeconomic history and policy.

Bruce A. Larson, Professor of Political Science
Prof. Larson earned his PhD in political science from the University of Virginia. A specialist in American political institutions and processes, he teaches and conducts research on a variety of topics, including the U.S. Congress, political parties and elections, and the politics of public policy. Larson was a Fulbright Scholar at China Foreign Affairs University in Beijing during the fall 2013 semester.

Jennifer Gaffney, Professor of Philosophy
Prof. Gaffney earned her MA in history and PhD in philosophy from Texas A&M University. Her interests are in social and political philosophy, with emphases in continental philosophy, philosophy of race, and the history of philosophy. Her current research focuses on the political philosopher Hannah Arendt and examines the relevance of Arendt’s thought for understanding the recent ascendance of right-wing populism in Europe and the U.S.