Asking the right questions, tackling complex issues, and communicating effectively—these skills lie at the core of Katie Lobosco’s ’09 work as a writer for CNN Politics. But even before she saw journalism as a serious career option that could combine her interests in government and policy, economics, and eventually, writing, she was drawn toward large-scale issues and their impact on the community.

At Gettysburg College, Lobosco, a political science major and economics minor, fine-tuned the critical lens through which she viewed life. In her courses, she learned about subjects with universal touch points, such as campaign finance, theoretical economics, and public policy, and even traveled globally to Nicaragua with her senior seminar class, where she looked at microfinance from an international point of view.

Each of these topics of study, among others, have become valuable banks of knowledge that Lobosco pulls from when she digs into newsworthy topics, conducts interviews, and crafts stories for CNN. But more critically, the rigorous and writing-intensive curriculum of the classes Lobosco took challenged her to develop her writing skills from what she once claimed to be a shortcoming into a strong suit. She later built upon this foundation by writing for The Gettysburgian.

“I think writing is stressed a lot at Gettysburg, not just in writing classes, but in the political science classes and even the economics classes. I feel like I was always writing papers,” Lobosco said. “Someone once told me, and maybe it was professor I had, ‘Whatever you do, you probably are going to have to write a lot.’”

After graduating from Gettysburg College, Lobosco applied to law school and got into several, but she was unsure if it was the right next step for her. Therefore, she deferred her acceptance and pursued a job as a grassroots organizer for the U.S. Public Interest Research Group. Even though the position wasn’t a perfect fit, it was a stepping stone.

“I quickly realized that I really enjoy educating people on an issue, but I don't want to persuade them on how they feel,” she said. “Instead of calling newspapers and pitching them my events or my press conferences to cover, which was a main part of my job with the U.S. Public Interest Research Group, I realized that I’d rather be the one writing the stories.”

This realization led Lobosco back to her New Jersey roots. She landed a job as a news reporter at her hometown newspaper, The Coast Star, and after several years in local journalism, she enrolled in graduate school at New York University, earning a Master of Arts in business and economic reporting.

At NYU, Lobosco bridged the global economy and finance groundwork she built at Gettysburg with journalism. She took specialized journalism courses in which she wrote on contemporary business issues, networked with top news organizations in the city, and then managed to turn her internship with CNN into a job in 2013.

Lobosco began writing for CNN’s business beat and has since transitioned into CNN Politics, focusing on how economic policy decisions made in Washington affect people’s wallets. While she’s reported on everything from the impacts of the 2017 federal tax reform to the Equifax data breach, the story that has stuck with her the most is from a series she wrote in 2015 about same-sex couples’ rights to spousal Social Security benefits.

In this piece, Lobosco told the story of a same sex-couple who legally married in Washington State in 2013. After one was diagnosed with cancer and died several months prior to their home state of Arizona ending its ban on same-sex marriage, the other was left to fight for her late wife’s benefits.

“She was a real person in Arizona affected by a change in D.C. that wasn’t going as smoothly as it should have been. She wasn’t getting the money she was due,” Lobosco said. “Shortly after the article was published, the Social Security Administration ended up making a statement clarifying the qualifications, and the woman got her bigger benefit. I don't know if my one story made that policy change come any quicker, but I do know that woman’s story was heard.”

Even though journalism was a career path that Lobosco stumbled upon, she’s since found her footing in knowing that her curiosity about the ways of the world can spark lasting change through writing.

“I've used so much of what I learned from the Gettysburg College liberal arts curriculum in my life, but one of my biggest takeaways was understanding the value of curiosity,” Lobosco said. “Having a strong sense of curiosity is super important, especially as a journalist. If you’re not interested in how things work or who the key players are, then you don’t have a story to write.”

Learn more about how the liberal arts and sciences at Gettysburg College give students the freedom to follow their curiosities down unexpected paths. 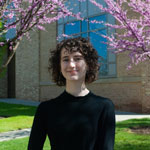