From mid-February to mid-March, the College received more than 45 media hits, with six of them being national mentions. Each mention is a testament to the great work that happens here and in ripple effects across the world.

AP News / Newsweek: ‘Ukraine invasion spotlights the delicate state of democracy’/ ‘What is going on inside Vladimir Putin’s head?

Political Science Prof. Douglas Page was quoted in an AP News article about Russia’s invasion of Ukraine and what it says about the current state of democracy. Page also served as an expert source in a Newsweek article, suggesting that while evidence may emerge about Vladimir Putin’s mental instability, we should also consider the persona that Putin may be crafting during this time.

“Nuclear war would doom Russia, but an irrational Putin could raise more questions in the West about his willingness to use nuclear weapons. This perception in the West may follow Putin’s objectives regarding nuclear deterrence and limiting Western involvement in Ukraine.”
— Political Science Prof. Douglas Page, Newsweek

Susan Eisenhower, the founding director, chairman emerita, and the first president of Gettysburg College’s Eisenhower Institute, was a guest on the Art of Manliness podcast. The episode explores President Dwight D. Eisenhower’s legacy of leadership, using Susan’s book “How Ike Led” as a jumping-off point.

The Gettysburg Times reported that Jen Bryant ’82 was the keynote speaker for the 2022 Callie Awards for the Exceptional Women in Adam’s County virtual award ceremony. Bryant is a member of the College’s Board of Trustees and author of the biography “Fall Down Seven Times, Stand Up Eight,” which is about Patsy Takemoto Mink, the first woman of color and the first Asian American to be elected to the U.S. Congress, who fought for Title IX. Bryant was also awarded an honorary Callie Award in the Arts.

Philosophy Prof. Steven Gimbel co-authored a commentary piece for Salon about Ivan Reitman, the former director and producer of “Ghostbusters,” “Meatballs,” and various other well-known films, who recently died. In this piece, Gimbel and his co-author explore Reitman’s life, framing him as a leading cultural voice of Gen X nihilism during the late 1970s and early 1980s.

“As an artist born in the shadow of Hitler’s death camps, the product of a love that survived the Holocaust, Reitman might have been forgiven for making bleak art,” Gimbel co-wrote. “Instead, he exorcised the demons his parents faced by bringing the world joy, telling stories in which awkward kids at a summer camp, Army grunts, and disgraced scientists all find a way to punch up and defeat their antagonists.”

Come back next month for a new recap of monthly media mentions. 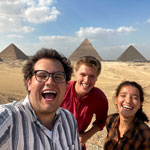 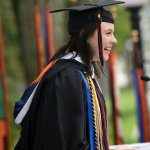