Uncovering an ‘emerging solution’ to cancer in First-Year Seminars 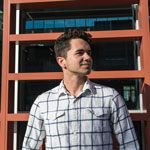 3D printing the future in the Innovation and Creativity Lab