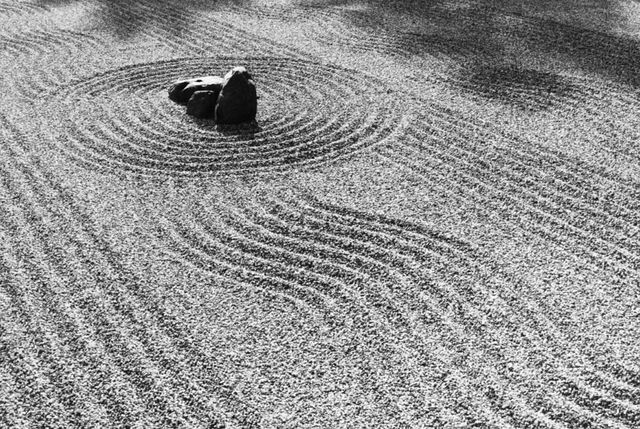 America’s brand of happiness - as seen through our government, our economy, and our psychology - is best described as seeking pleasure and avoiding pain. With this subtly utilitarian creed we assume happiness is a quantifiable mental state to be attained as a goal. This philosophy inevitably traps us in an absurd, endless circle: we either look for permanence in that which is impermanent, or we try to barricade ourselves against a world of change. The quest for happiness can only begin when we have given up the quest itself. Happiness can only be found, if you can deem it a matter of ‘finding,’ by letting go of the very thing we seek: happiness.

In Pursuit of Authenticity: Heidegger and Jaspers - Existentialism’s Foils by Alexander Englert

As Germany’s leading existentialists of the twentieth century, Martin Heidegger and Karl Jaspers both discussed the notion of ‘authenticity,’ or the interpretation of meaning from an otherwise meaningless, finite world. With the shared goal of giving modern man an existential foundation from which to interpret meaning they went about to their task with vastly differing methods. For Heidegger, the pursuit of authenticity is an individualistic affair without ontical boundaries - no discussion is offered as to political, ethical, or interpersonal limits to the individual’s authentic interpretations.  Thus a gap exists in Heidegger’s discussion through which it was possible for him to soundly assert National Socialism as authenticating.  For Jaspers, the necessary medium of communication as a means to truth-seeking is a condition of authentic ‘Existenz.’ Thereby the sole means to authenticity are bounded by open communication with one’s fellow man. Ultimately from this contrast of philosophies, one glimpses the susceptibility of any subject-authenticating philosophy that ignores ethical discussion.

Finding Value in Darkness: A Journey Through Pain by Adam Fry

What is pain and why is it important? Some theories construe pain as a “thing” or pain as having a specific location which make emotional pain ambiguous. Such theories also make ambiguous the feeling similar to pain we get when we observe others in pain. Additionally, pain is often seen as something irreducible and having no positive value. I begin by defining pain as a state of being rather than a “thing,” or a concept that has a tangible aspect to it. Like pleasure, pain is a straying away from an individual's neutral state.

Through that definition I offer three ways to view pain, as physical, non-physical, and perceptual. I argue that value is to be found in these forms of pain. Without romanticizing or glorifying painful experiences, I argue that pain has the same sort of potential for value that pleasure has, but it requires recognition and acknowledgment. I conclude by recognizing that positive value is a possibility in pain and that it is not a universal result. I conclude that it is important to understand that painful experiences can be beneficial to life and should not be considered simply negative and without value.

The Right to Clean Water: A Universal Claim by Katie Gramlich

In a world where our view of human beings and humanity is ever evolving, it likewise only makes sense to view our rights as such. This is why many call for the inclusion of new rights to the Universal Declaration of Human Rights (UDHR), originally adopted in 1948. The right to clean water is one such right, and with its necessity for all human beings to sustain life, its inclusion seems like an obvious one. However, there are many arguments against it, and social and welfare rights more generally, that I take up in order to promote the right to clean water. My thesis begins by introducing my view of human rights as social constructions based solely on human needs, as opposed to idealistic arguments that follow from natural law. I then defend the right to clean water against accusations of being a goal rather than its capacity to be a right. In light of our globalized economy that commodifies anything it can, I explain why treating water as a commodity can have and already has had catastrophic consequences in the developing world. Unlike many anti-privatization authors, I do not suggest that companies should not own water from a moral point of view, but rather, that to do so has detrimental effects on some of the poorest communities. Finally, I assess the role of duties inherent in human rights with the help of the Hohfeldian concept and Wenar's work, ultimately suggesting an expansion of our current conception to place greater responsibilities and forms of accountability at all levels. I am not naïve about the limits of a human rights framework, and particularly in the case of the right to water, where it might be difficult to quantify and observe violations of it. I conclude that we must see the framework I have developed as a tool in the development of a just and better functioning globalized economy, where we do not sacrifice fairness, and the difficulties of providing the world with clean water do not prevent us from naming and striving toward a fulfillment of the right to it.

Currently, education has been placed at the heart of our societies. Attending formal education institutions is thought to better an individual's life when in fact there is also the possibility of detriments. The goal of this paper is to find a deeper meaning or worth in education: something separate from making our lives better. This meaning and worth emerges from both the positive and negative values of educations. In fact, the meaning arises from the deep dilemma that occurs between the detriments and benefits of formal learning. Our society needs to know the possible ways in which education can change individuals, and there needs to be a sense of understanding gained from both the benefits and the detriments.

Beauty as a Means to the Meaningful by Samantha O'Leary The central questions of philosophy revolve around how one must approach life. Ethics, language and human nature have been at the forefront to provide answers, but I argue that beauty be included in that category as well. After spending the semester engaged in a philosophical inquiry focused on beauty, I have emerged with the sense that beauty is a compass that can lead to a fuller life. Beauty is entirely contextual: based in experience, memory, sentiment and suffering. One may experience it in anything, but not everything and no two people will necessarily ever agree on what is beautiful and what is not because that would undermine its significance. Someone sees something as beautiful, whether it is a painting by Frida Kahlo, a photograph of a rusty swing set, a broken bowl or a violent hurricane, because that aesthetic object stirs within the individual the indescribable need to bask in it, take it in, but not to necessarily understand or enjoy it, rooted in a deeper personal connection with that object. That deeper meaning compels the viewer to call it beautiful.

Beauty can be, but is not necessarily a pleasure, nor is it any testament to empirical truth, as Keats would like us all to believe. It is steeped in context thus making it illogical to even expect it to relate ultimate truths: some of the most widely-considered beautiful images are utter lies within themselves.

Training oneself to recognize where one sees beauty can be beneficial to one's understanding of life and its circumstances. Once one consciously identifies how one experiences beauty, one can approach all aesthetic experiences seeking that beauty and thus cultivate an appreciation for new cultures and foreign experiences. In such experiences of beauty one can also realize the values of suffering and sadness as well as pleasure, health, age and a myriad of other elements of life, essentially giving rise to a fuller existence.

The End of Happiness by James Pollock

The End of Happiness explores both happiness as the ultimate intrinsic good, the end which all seek, and the final cessation of our happiness. Happiness holds a peculiar status among other objects of intrinsic worth in that the intrinsic value of things like truth, wisdom, beauty, harmony, love, and friendship all seem to add to the sum of happiness. Immanuel Kant suggests that this is a quality shared by virtue, and we enter into a question reminiscent of Plato’s dialogue Euthyphro: are we happy because we are aware of our virtue, or are we virtuous in order to be happy? Whichever conclusion we come to, Kant’s conception of the summum bonum, the supreme and total good, requires happiness, and necessitates that happiness be considered as a motivating force in human life and an end toward which we all move.

The Imagination by Kate Vredenburgh

The imagination is by no means as simple as philosophical discourse and common culture would have it appear. Philosophers and others alike have a received view of the imagination as something free, flippant, and disconnected from serious discourse about justice, economics, or politics. This paper seeks to deepen this received view by showing how the imagination is instead a rich and varied collection of faculties that play out in different and important areas of life: in reasoning, in ethics, in art, and in speaking about the world. By digging below our common conception, we can better understand and appreciate the imagination’s limits, its connections with rationality, and its grounding of ethics, giving us a fuller conception of the range, potential, and importance of the imagination.