Zarathustra Laughed: The Misappropriation(?) of Nietzsche and the Rise of Nazism" by Robert Kellert The revolutionary German philosopher Friedrich Nietzsche is regarded by some as the intellectual progenitor of Nazism. But is this label a fair one? The question has inspired a lively philosophical debate and still proves difficult to answer. This paper probes Nietzsche’s texts and personal letters, as well as the historical context surrounding Germany’s development from his own period to that of Adolf Hitler, in the attempt to ascertain the extent of Nietzsche's responsibility for Nazism and its triumph in Germany. Though not a subscriber to what later became Nazi ideology, Nietzsche embraced appropriations of his philosophy by radicals (including proto-Nazis ) and in that respect must share responsibility for the emergence of Nazi Germany spearheaded by Hitler-a lesson which modern intellectuals and others, as well, should heed not only for their own sakes, but for that of humanity.

“Technologically Transformed: Relating In Our Actual-Virtual Environment” by Sam Luetters "The Causality of Emergent Properties: A Philosophical Perspective on the Mind-Body Debate" by Andrew Lee

This thesis explores the widely debated connection between mind and body. Supervenience, the view there can be no mental changes without corresponding physical changes, is the theoretical framework within which I examine mental causation. Specifically, I argue against one salient assumption of supervenience, namely, that there are separate ontological categories for the mental and the physical. Instead, I suggest that we take an evolutionary approach to the mind/body question and propose a theory of mental emergence similar to that of Stephen Jay Gould and V.S. Ramachandran. Such an approach requires us to think of the surfacing of mind evolutionarily as spandrel-like, emerging spontaneously and unintentionally from a complex system of constituent material parts (blood, organs, etc.). In this framework, we can more easily conceive of mind as ontologically indistinguishable from the physical world insofar as it is made up of the same “stuff.” The naturalist position I defend has been influenced by Chomsky’s argument that we have no definitive notion of the physical and therefore cannot demarcate the physical from the mental. Although I do not share Chomsky's conclusion that the mind/body problem is therefore insoluble, I do argue that our present knowledge of the physical limits our grasp of its potentiality. Finally, I examine the 1985 Benjamin Libet experiments, which question the existence of free will as it is commonly understood and argue that the problem of mental causation is actually a problem with our ontological categorization of self. This ontological problem thus complicates and affirms my skepticism about supervenience and the postulate it makes of separate ontological categories.

“In Defense of Beauty” by Gabrielle Cossolini

“In Defense of Beauty,” I set out to define the experience of beauty, to establish principles of beauty, to differentiate beauty from other phenomena (such as superficial materialism, flash, and greed), and finally to defend beauty as a moral value on par with truth, justice, and knowledge. I begin with the philosophical importance of defining beauty; I attempt to demonstrate why beauty is ripe for a defense, citing its confusion with other sensory-dependent qualities.

“Goose, Gander, and Gender: Exploring the Impact of Embodied Perception on the Gendering of Spaces” by Claire Darchicourt

In this paper, I examine the effects of embodied perception on the changing interpretations of gendered spaces in American culture. Phenomenology provides a comprehensive approach to the bodily and spatial experiences of the individual, allowing writers like Judith Butler and Luce Irigaray to define gender as a socially constructed system of norms. This concept gives gender an elasticity wherein norms are used as a tool to create or perpetuate gendered spaces differently based on purpose and context. By encouraging a questioning of the gender binary, phenomenology motivates appraisal and change of entrenched cultural associations between gender and space.

“Architecture and the Search for Meaning: Finding the Wright Angle” by Brian Engelsma Every day we interact with buildings and structures all around us. Whether it is our homes, a place of work or worship, or a center for entertainment, it is hard to imagine what our lives would look like without buildings. As it stands, however, philosophy as a field and we as individuals have given very little thought into what questions architecture poses, how as a field it should be differentiated from other arts, and how a greater understanding of our relationship to architecture can lead to a greater understanding of both ourselves and our surroundings. This paper seeks to explore what relationship humanity enters with the structures we erect, gaining insight into how buildings gain significance for different people, navigating how we ought to think about the different meanings that can arise from architecture, and considering whether or not some principles of architecture are normatively better than others in helping individuals develop a more genuine relationship with buildings. 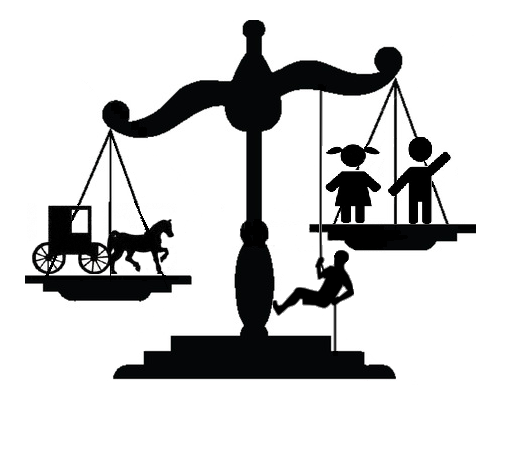 The Universal Declaration of Human Rights has made it clear that everybody has a right to an education, but it is vague with regards to what that entails. Additionally, there is a crucial absence of standards with which to measure the quality of such an education. Furthermore, the UDHR has pushed an agenda of parental rights at the expense of the child, which further jeopardizes educational quality. The Amish community and the Supreme Court ruling in Wisconsin v. Yoder provide invaluable examples of the kinds of rights clashes that are ensnared within the topic of educational rights. However, examining these conflicts through a capabilities lens offers greater insight than by simply looking at the traditional ways that educational rights have been defended. Consequently, this view allows for deeper pluralism with regards to the methods of education and an understanding of education that resists both indoctrination and tolerance.

“From Apes to Apples: Science, Religion and a Christian Understanding of Evolution” by Jonathan Hibshman Science and religion have a troubled past. Since the publication of Charles Darwin’s On the Origin of Species, conflict between biology and religion has escalated. Daniel Dennett calls evolution Darwin’s “dangerous idea,” insinuating that evolution ought to threaten religious thinkers who wish to hold onto some conception of God. I explore the relationship between science and religion with a specific focus on evolution and Christianity. I propose a theistic research programme that can operate alongside a naturalistic version with equal if not increased motivation and reliability. From such a viewpoint, we can find common ground between theology and science which allows science to enlighten our understanding of God. The God of evolution surpasses prior conceptions of the divine in at least three ways: personal nature, capacity for dynamic love, and perfection as a process.

“Special Obligations: The Structural Risks of Friendship” by Anna Myavec “Owning the World: A Phenomenological Look into the Experience of Ownership” by Santosh Nandabalan

Human beings possess an innate sense of ownership, which laws and customs have regulated and endowed with significance in various ways. How can this sense of ownership provide us meaning about ourselves and the world we inhabit and take on? According to the contemporary French philosopher Louis Althusser, ownership is legitimized only by a social milieu and our “owned” objects constitute us. On this view, property relations are illusions of agency and void of intrinsic meaning. This view ignores the subjective experience of ownership. Rather than adhering to a structuralist notion of ownership, I focus on the significance of ownership as both a social and subjective phenomenon. In this thesis, the phenomenological perspective I defend demonstrates the importance of the subjective meaning of ownership while still affirming the social foundations which allow for such meaning.

“Laughing Matters: A Philosophical Perspective of Laughter as a Social Response” by Kaitlyn Roman

Contrary to the traditional views that locate the source of laughter in biology, psychology, or grammar, I argue, in line with John Morreall's account, that laughter is socially meaningful.  Sometimes we laugh as an uncontrollable reaction, but usually our laughter conveys conversational content.  This meaning is explained through the use of modified Gricean conversational rules and implicatures, which makes laughter similar to other conversational utterances.

“A Dignified Response to Kant: Justifying the Dignity of Non-Persons” by Evan Singer

According to Immanuel Kant, only moral persons—free and autonomous, rational agents—have dignity and therefore must be treated with respect. But are there not many other entities—“non-persons”—which claim our moral consideration: human beings who do not meet Kant’s conditions, animals, significant cultural artifacts, for example? My thesis explores the meaning, justification, and applicability of dignity as a moral concept. I interpret dignity as a form of moral considerability having several types. I describe two methods for identifying necessary traits for the ascription of dignity, and I argue that dignified entities are irreplaceable, priceless, and morally self-sufficient—but need not be self-legislating moral agents. In the increasingly connected world in which we live, we are faced with an obvious question: is it possible for the individual to live simply and deliberatively? This query is not new. In Walden, Henry David Thoreau turned to Nature in an experiment of solitude and individual cultivation. A pursuit of Wildness was central to his experiment; however, Thoreau’s conception of Wildness differs from most understandings today. In order to better understand this, we must first dispel the portrait of Thoreau as a tree-hugging idealist whose experiment is one of retreating from society. Instead, his philosophy is aimed at change—not just negation. I argue that Henry David Thoreau enters the wilderness to reach a higher understanding that is expressed within Nature, rather than just through it. Thus, place is a crucial component of Thoreau’s project as he looks towards the unbounded, unmediated truth found in Wildness to formulate his thought. The revered treatise of military strategy, The Art of War, written by the Chinese General Sun-Tzi, explores principles of warfare and rules for the conduct of war. Sun-Tzi’s The Art of War examines such topics as “Laying Plans,” “Waging War,” “Attack by Stratagem,” “Attack by Fire,” and “Use of Spies.” Such classic themes of military strategy suggest that the treatise concerns only how to wage war and defeat enemies. But The Art of War also has an ethical dimension that scholars such as Roger Ames and Victor H. Mair highlight. I argue with Ames and Mair that The Art of War cannot be fully understood if its ethical dimension is ignored.  Sun-Tzi affirms Taoist and Confucian ethical virtues and ultimately argues for the necessity to move away from conflict to humaneness and righteousness. I conclude that Sun-Tzi wrote The Art of War as a way to explore how one might return to a Taoist/Confucian way of life through adherence to virtue.